Clinton on emails: I should have used government account 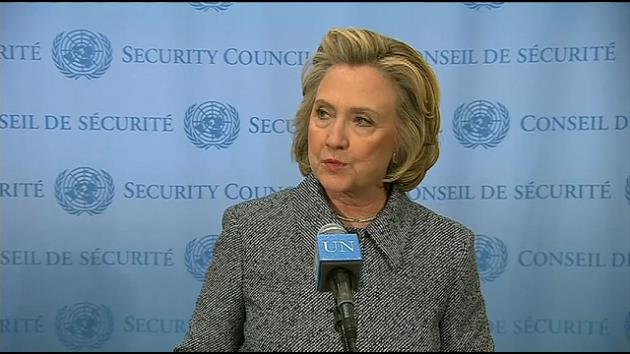 UNITED NATIONS (AP) — Confronting a growing political furor, Hillary Rodham Clinton conceded Tuesday it was a mistake to exclusively use private email as secretary of state, but she defiantly rejected accusations that she created a security risk or violated the law. She also defended getting rid of tens of thousands of personal emails.

“I fully complied with every rule I was governed by,” Clinton said in a 20-minute news conference that marked her first comments on the controversy.

Clinton’s acknowledgement that she deleted emails she described as personal in nature is likely to fuel further criticism from Republicans who see the matter as harmful to the former secretary of state’s all-but-certain presidential campaign. Because Clinton’s emails were run off a personal server that she does not intend to turn over to the government, there is no way to independently verify the content of the discarded emails.

Clinton said she had exchanged about 60,000 emails in her four years as President Barack Obama’s secretary of state. Half were work-related and none contained classified information, she said.

The controversy has presented a major test for Clinton and upended her careful blueprint for the rollout of her campaign. The clear front-runner for the Democratic nomination, Clinton had planned to spend March touting her work on women’s issues and giving a handful of paid speeches before announcing her candidacy in early April.

Instead, she found herself standing before dozens of reporters at the United Nations addressing a matter that has revived questions of ethics and secrecy that have long trailed Clinton and her husband, former President Bill Clinton. Her appearance came after her previously scheduled speech on women’s rights at the UN.

Before Tuesday’s news conference, Clinton’s only comment on the email disclosures had been a late-night tweet last week saying she wanted the State Department to make her emails public. Her decision to weigh in further came as Democratic allies began publicly pushing her to do so.

Asked whether the email disclosures would affect her presidential ambitions, Clinton said, “I trust the American people to make their decisions about political and public matters.”

The Republican Party’s leading presidential prospects had no immediate response to Clinton’s explanations. But in a signal that the issue was unlikely to fade soon, Republican National Committee Chairman Reince Priebus blasted Clinton’s comments as “completely disingenuous.”

“No one but Hillary Clinton knows if she handed over every relevant email,” Priebus said.

Clinton’s comments also appeared unlikely to quell efforts by GOP lawmakers to use the matter to bolster their investigation into the deaths of four Americans at a U.S. facility in Benghazi, Libya, in 2012. Following the news conference, Rep. Trey Gowdy, the South Carolina Republican leading the committee, said he planned to call her to testify at least twice.

A central question for Clinton over the past week has been why she chose not to use government email if she wasn’t trying to skirt federal rules that require officials’ communications to be archived.

She described her use of personal email as a matter of “convenience” and a way to avoid carrying two devices. She said that didn’t appear to be an issue at the time, but that in hindsight, it would have been “smarter” to use a government account as well as her personal one.

“I have an iPad, a mini-iPad, an iPhone and a BlackBerry,” Clinton said.

The email controversy stems from reports last week that Clinton had exclusively used both a private email address and a private server while at the State Department.

Clinton said repeatedly Tuesday that she had taken “unprecedented steps” to provide the State Department her work-related communications. She described the missing personal emails as ones she wrote about her daughter’s wedding, her mother’s funeral, her yoga routine and other similar matters.

“No one wants their personal emails made public, and I think most people understand that and respect privacy,” she said.

Clinton left the Obama administration in early 2013, but didn’t turn over her written communications for nearly two years and only in response to a State Department request.

The email disclosures have raised questions about whether she fully complied with federal laws requiring government officials to preserve written communications involving official business. While Clinton insisted Tuesday that she was not violating any rules, she does appear to have gone against what the Obama White House has called “very specific guidance” that officials should use government email to conduct business.

She said she emailed her State Department colleagues on their government accounts and therefore expected her communications would be archived. She provided no evidence to support her assertions that her email system experienced no security breaches.

The department says it will take several months to review the material Clinton turned over last year. Spokeswoman Jen Psaki said Tuesday that once the review is complete, the emails will be posted online for the public to see. Passages revealing anything from trade secrets to sensitive national security information could be redacted, in keeping with Freedom of Information Act guidelines.