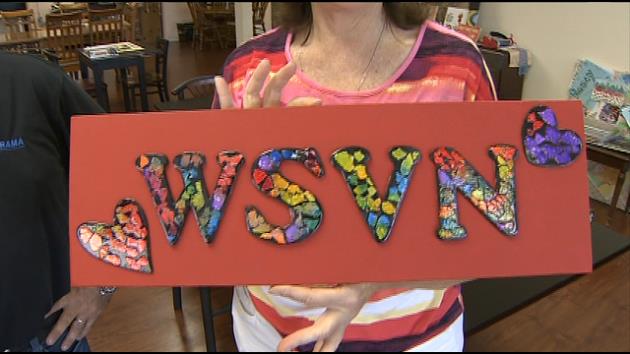 Give thanks at Help Me Howard. They try to help people year round and to do that they need South Floridians to step up. They often do, after the story airs and on the day before Thanksgiving. Here are their stories in Help Me Howard with Patrick Fraser.

Peggy and Louise were driven to open Amazing Age Adult Day Care by their hearts.

Peggy Hopper: “Because this is a dream that we have both had We both had parents that we cared for that needed assistance and needed a place like this.”

Their hearts told them Margate needed a nice safe place for elderly adults to go. Their heads told them they needed a big sign so customers could find them. They paid Sign Stats, Inc. to create and install the sign. Instead, they took their money and fled.

When our Help Me Howard aired Matthew Blank, the owner of Davie Signarama, saw it.

Matthew created this sign, gave it to the day care and installed it for free.

Peggy Hopper: “This going to keep us alive the people who could not see us from the street.”

In return the people who come to the adult day care made a sign for Matthew.

Louise Smith: “We really want to thank Signarama and Matt. He has just been awesome.”

And they gave us one also.

Peggy Hopper: “We are so grateful to Howard, Patrick, Amber, John. And this is made by the care recipients of Amazing Age.”

Johnny Gomez: “I saw the cop turn its lights on. ‘Park it. You are going to jail! Give me your license now!’ But I said ‘what have I done?'”

After his license was suspended Johnny got a bike with a small gas motor to ride to work. One day a Miami-Dade officer pulled him over and start handing him tickets.

Enrique Ferrer: “The cop was doing his job, but did his job too well maybe? He didn’t need to go that far. Gave him all kind of tickets that were unnecessary.”

If Johnny had gone to court and lost, he could have gone to jail and would not be able to get his license re-instated for five years. Enrique watched the Help Me Howard that night.

Enrique Ferrer: “Got to call Patrick Fraser in the morning to see what we can work out for Johnnie.”

Enrique contacted me the next day and his law firm went to work for Johnny for free.

Enrique Ferrer: “We were able to get four of the five tickets dismissed and we were able to close one of them in a way that we got him no points on his license.”

Johnny is in the clear and clearly appreciative to Enrique and his law firm.

Johnny Gomez: “Oh yes, very, very thankful they helped me out. Even the judge told me that I was a lucky man to have a lawyer like that.”

Soon Johnny will be able to drive a car again.

Over at the Northwest Federated Club of Broward, they were just trying to keep an old bus drivable.

Addie Owens: “We are the oldest women of color club in the state of Florida. We have been there over a hundred years.”

But sometimes their old bus, which they used to transport people, drove like it was 100 years old. Then the City of Fort Lauderdale gave the women’s club a $75,000 grant to buy a new bus. They put down a deposit and ordered it, but the bus company couldn’t deliver.

Addie Owens: “‘You are not going to have that bus ready for a 100 days.’ Then we lose that grant. Then we have no money to buy a bus.”

With their deadline approaching, we got their $8,500 deposit back. Another company promised to deliver a new bus within a few days. Our story aired.

Addie Owens: “Thank you guys. I love you!”

The next time we saw Addie was the unveiling of the club’s new bus.

Addie Owens: “By doing this for the seniors, we are saying there is no mountain high enough so we are happy.”

Fort Lauderdale provided the grant, meaning a lot of people had stepped forward to help.

Addie Owens: “Help Me Howard, let me tell you: thank you.”

Patrick Fraser: When you spend time around those people, women who spend their days helping people, you leave smiling. As you just saw, there are a lot of wonderful people in South Florida. The Ferrer Shane law firm, Davie Signarama. They gave their time and money to give other people something to be thankful for. Thank you.

Got something that’s gobbling you up? Wanna carve out a solution? Contact us.

We don’t talk turkey. Just provide the dressing so no problems are left over for you.