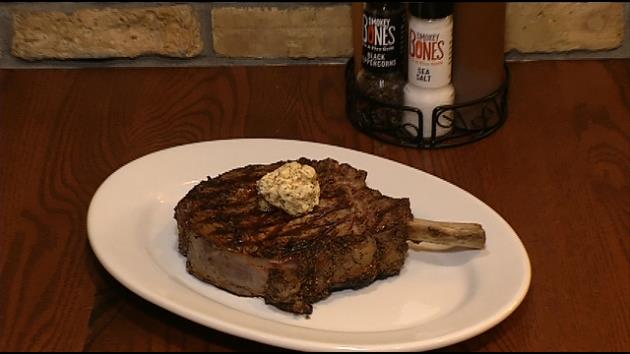 Lets face it– New Year’s resolutions were so long ago, you’ve probably forgotten what they were. But if you’ve been good, keeping a healthy diet, eating less, you deserve a little break. A little break for a huge piece of meat.

Forget about less is more, when it comes to a scrumptious piece of meat, bigger is definitely better.

Ryan Esko: "What we came up with was a great large rib eye, it’s actually over 2 pounds of meat, that we season and that we put in the smoker which gives it a really unique flavor and then we finish it off on the grill."

At Smokey Bones in Plantation and in other locations in South Florida, they’re serving up over 2 pounds of meat topped with Creole butter. And as if that wasn’t enough — it comes with goodies.

Ryan Esko: "We have 15 types of sides. Anything you can think about that would go great with a rib eye."

Pick two double portion sides– like broccoli or baked potato, two salads, and something fluffy to seal the deal.

Ryan Esko: "And then of course our homemade signature donuts which come out nice and hot and they actually melt in your mouth."

Ryan Esko: "The whole dinner is $60 dollars and comfortably feeds two to three people or the champion eater."

Ryan Esko: "We have a wine selection, we have signature cocktails and we also have a full selection of craft beers. Actually we have over 70 beers here."

And if you thought no one has finished this feast alone– think again.

Ryan Esko: "You’re looking at one right here, and there’s a couple of other ones up for the challenge but most people share it between two or three people."