Kevin Hart and Ice Cube in ‘Ride Along 2’ 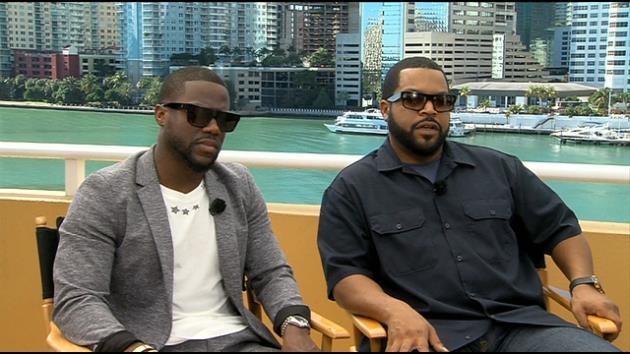 It was a busy day for Kevin and Cube. Because on top of getting a star, they also got some quality face time with Deco’s Chris Van Vliet. He sat down with them at the Mandarin Oriental, and after hanging out with them at the world premiere last night and again today, they are practically best friends!

Practically? We are best friends! I’m really gunning for a role in "Ride Along 3" but until then, I guess we can talk about "Ride Along 2" which wasn’t just set in Miami, it was filmed here too.

Kevin Hart and Ice Cube are reunited and it feels so good.

Chris Van Vliet: "What was day one like on the set of ‘Ride Along 2?’ Was it like getting the band back together?"

Kevin Hart: "Yeah. We both showed up with the ambition of doing what we did the last time much better."

This time around, it’s not a ride along. They’re soon-to-be brothers-in-law and forced into being partners. They’re tracking a drug kingpin and it leads them here to Miami and when they arrive they’re greeted with explosions, shootouts and because it’s South Florida, maybe a few surprises.

Chris Van Vliet: "Cube, how do you not laugh in these scenes with him?"

Ice Cube: "It’s not easy, because he’s subject to do something that you not expecting all the time."

They’ve stepped things up from the first "Ride Along" — with more action and a bigger cast including Olivia Munn and Ken Jeong who tells us he had to get in shape for the role. Kinda.

Ken Jeong: "I looked at a treadmill for 30 minutes a day and I said, ‘wow that looks hard.’"

Chris Van Vliet: "Kevin, I want to ask you, what would a ride along with Ice Cube looked like back in the NWA days?"

So the movie comes out next friday and if you can’t get enough of Kevin Hart, don’t worry, he’s in pretty much every other movie… And it sounds like they actually are planning to make a "Ride Along 3."