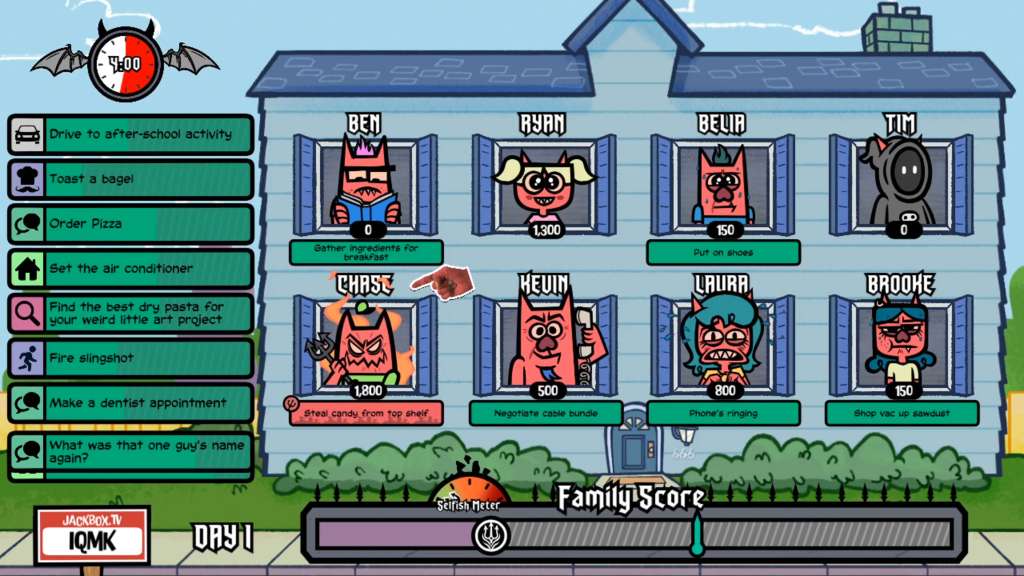 (CNN) — Jackbox Games likes to think of itself as the 21st century version of such legacy games as Operation, Connect Four and the Game of Life.

The privately owned company, founded in 1995, makes software that has been powering many a game night across America and several European countries, especially as more people stay home during the ongoing pandemic.

Families can gather in front of a TV and use their phones as controllers to input witty remarks in a game of Quiplash, where players vote for their favorite quip. Friends can call each other on Skype or Zoom and screen share their copy of Jackbox on the PC, as other friends join the game remotely.

“All of our games are rated T for teen, but you can turn on family-friendly mode and safely and comfortably play them with your kids. And you can have your parents and grandparents play them as well,” said Jackbox CEO Mike Bilder.

In an age where it can be hard to play board games with anyone outside your own home, many have turned to Jackbox Games.

“We compare ourselves to the modern-day digital Parker Brothers or Milton Bradley,” he said. “Instead of grabbing Monopoly or Coup or the Game of Life, you grab Quiplash.”

Jackbox is close to doubling its player base this year to 200 million, compared with 100 million in 2019, Bilder told CNN Business. Families have taken to chronicling their Jackbox game nights on their Instagram stories. Zoom parties feature Jackbox regularly.

The company received venture capital investment from Jackson Square Ventures in 2011 and has been self-funded ever since, said Bilder. He declined to discuss the company’s revenue or profit.

One reason for the game’s popularity is its ease of use for players who might not consider themselves gamers. Like other games such as Animal Crossing: New Horizons, Among Us and Fall Guys, Jackbox doesn’t require speedy reaction times or controlled muscle memory to power through.

It also helps that Jackbox Party Packs are on nearly every platform, including mobile, PC, console, Fire TV, Apple TV, Mac and Linux. Only one player needs to own the game for a party to play.

Jackbox just released the Party Pack 7, which CNN Business was able to try out early. The pack, which retails for $29.99, is a collection of five games. Jackbox releases a new party pack every year, each with proven hit games like Quiplash, plus a few experimental ones.

One of the more experimental ones, Talking Points, sounds like the concept behind the drunk PowerPoint presentation party that went viral two years ago. You improvise a speech on a random topic and someone else in the party selects your slide photos, which could range from bizarre to outright ridiculous, like a woman laying on a couch with a pizza over her face. The best speech wins.

“Some people don’t like presentation games,” Bilder conceded. “Maybe everybody doesn’t love that game. But if half the people do, and if everybody loves a few of the games in the pack, then they feel very justified in their purchase.”

The company is already brainstorming ideas for Party Pack 8. It said it will have player data in a few months to help decide what games make it in next year’s release.

Jackbox has seen its player base increase 500% to 1,000% month-over-month since the quarantine began in March, as 110 million people played the games within the first three months of quarantine, the company told CNN Business.

“Thanksgiving is usually a high volume of traffic for us … New Year’s Eve is always the biggest day of the year,” said Bilder. “What we ended up seeing (during the pandemic) was daily traffic like Thanksgiving and weekend traffic that was bigger than any New Year’s Eve we’d ever seen.”