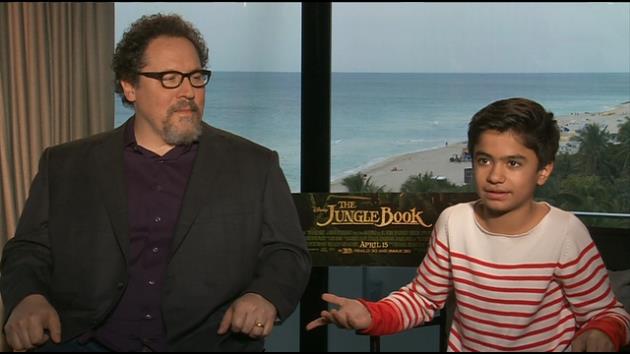 Remember adorable Mowgli, Shere Khan, and the singing, upbeat bear Baloo in "The Jungle Book?" Well, forget ’em. The live-action remake is coming out, and this ain’t your dad’s "Jungle Book." The stars were in SoFlo today, and Deco safari guide Chris Van Vliet is here with more.

Nearly 50 years after "The Jungle Book" first came out, there’s a new spin on it. And leave it to the director of "Iron Man," Jon Favreau to shake things up.

Director Jon Favreau takes the 1967 animated Disney classic and brings it to life in this live-action movie with all the characters you know and love.

The most important character is Mowgli, the only human in the film.

The role of Mowgli went to 12-year-old Neel Sethi, who was one of 8,000 boys who auditioned. And get this: It was his first audition ever.

Chris Van Vliet: "So what were you looking for in that role?"

Jon Favreau: "When you gotta watch one kid for a whole movie, that’s a lot different than casting a kid as a supporting player. So I was looking for somebody that was interesting, who was fun to watch, and I liked his personality."

Neel stars with the voices of some Hollywood heavyweights including Scarlett Johansson, Ben Kingsley, Bill Murray and Christopher Walken.

Chris Van Vliet: "So in those scenes where you’re talking to the animals, you’re obviously not seeing them, but what are you hearing? Are you hearing the celebrity voices?"

Neel Sethi: "I am not. At that time, I didn’t know what it really sounded like, how Bill Murray or Ben Kingsley made it sound like."

Chris Van Vliet: "Jon, you did a lot of CGI in ‘Iron Man.’ How similar was that to what you did in ‘The Jungle Book?’"

Jon Favreau: "It was a good starting point. It’s one thing to do metal and hard surfaces — that’s a lot more convincing – but getting fur and skin and emotional performances and relying on the computer effects to actually bring a human emotional performance through these animals was quite a challenge."

"The Jungle Book" is out in theaters April 15.