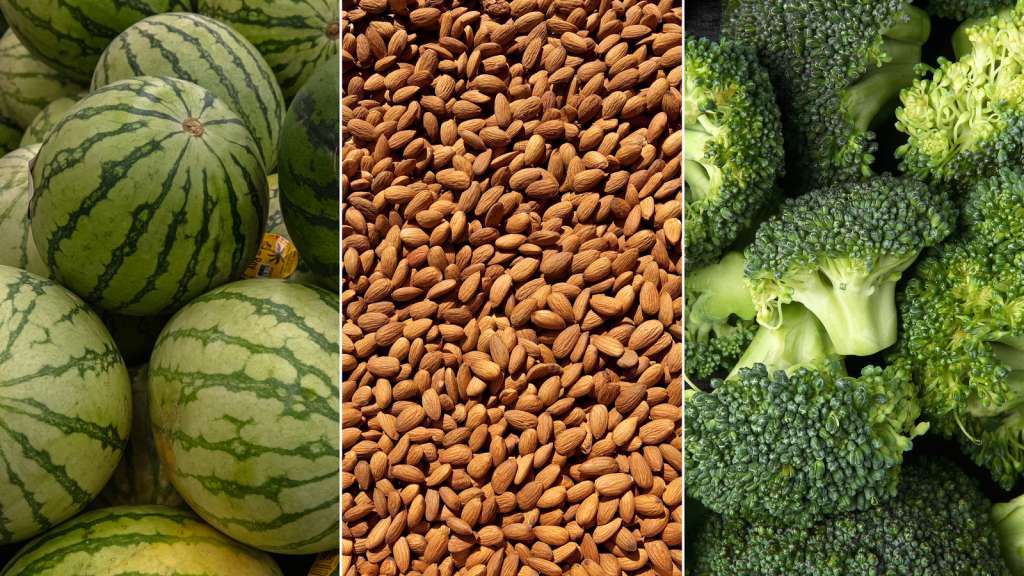 CNN) — Bee populations are declining. More than half of the bat species in the United States are in severe decline or listed as endangered. And international scientists recently announced the monarch butterfly is perilously close to extinction.

What these three creatures have in common is that they are all pollinators. Without them, fruits, vegetables and other plants wouldn’t be pollinated, and that’s a major problem for our food supply.

“One out of every three bites of food that we eat” is directly connected to a pollinator, Ron Magill, the communications director and a wildlife expert at Zoo Miami, told CNN. Around 30% of the food that ends up on our tables gets there because of things like butterflies, bees and bats.

Losing those critical populations could also mean losing some of our favorite foods.

Apples, melons, cranberries, pumpkins, squash, broccoli and almonds are among the foods most susceptible to the pollinator decline, according to the Food and Drug Administration. Bees, in particular, are responsible for pollinating around 90 commercially produced crops, the agency reports. Even tequila is at risk.

“It’s all so intricately connected, whether you’re eating the food that is directly pollinated or you’re eating something that depends on that pollinator,” Magill said. “It’s a domino effect.”

In other words, if you are eating fried chicken or pork chops, those chickens and pigs eat fruit, vegetables and other plants that depend on pollinators.

And the climate crisis has taken a toll on pollinators. While more intense and prolonged drought is the most obvious impact, a growing concern is the effect of extreme heat — particularly on butterflies.

“Because butterflies are some of the most sensitive insects to changes in temperature, they are considered the ‘canary in the coal mine’ when it comes to climate change,” Magill said.

Warmer temperatures cause plants to bloom sooner, which is out of sync with when the butterflies lay their eggs and metamorphose. This will mean the flowers they depend on for food will have already bloomed out, leaving little for the butterflies to feed on, which will in turn greatly impact their ability to reproduce and survive.

It snowballs into a cyclical problem where the butterflies can’t get the food they need to reproduce, nor can the plants get pollinated — causing both to suffer greatly.

Also, for butterflies like monarchs that are known for long migrations from the Northern US to Mexico — food along their route may no longer be available at the time that the natural migration takes place.

A UN report in 2019 found that a million species are at risk of extinction in the coming decades, as the climate crisis accelerates. Magill says we’re starting to see that play out in insect populations.

“One million species in the next 50 years,” Magill said. “That is catastrophic.”

Human impact on natural pollinators
Scientists at the the International Union for Conservation of Nature last month added the monarch butterfly — one of the world’s most popular and recognizable insects — to its red list of endangered species, noting that the destruction of its habitat and rising temperatures fueled by the climate crisis are increasingly threatening the species.

“Climate change has significantly impacted the migratory monarch butterfly and is a fast-growing threat; drought limits the growth of milkweed and increases the frequency of catastrophic wildfires, temperature extremes trigger earlier migrations before milkweed is available, while severe weather has killed millions of butterflies,” scientists reported.

Honeybees began to show an alarming decline in 2006. From April 2020 to April 2021, beekeepers in the US lost around 45% of their colonies, according to Auburn University’s College of Agriculture, which reports that the average acceptable turnover is around 20%.

Climate change may be amplifying a deadly parasite in honeybee populations. Research has showed that those bee-killing parasites become more prevalent in warmer climates which means as temperatures continue to rise the parasites could flourish and become catastrophic for bees.

Several countries and even some states in the US are already moving to help protect these crucial species. California is pushing to restrict bee-killing pesticides.

Magill noted that while these declines are happening gradually, they will eventually be too great for ecosystems to overcome — like a tipping point beyond which some species will be lost forever.

“You know, what is the straw that is going to break the camel’s back when it comes to the balance of the environment?” Magill said.

Tequila at risk
Bats also play an irreplaceable role in food security. The USDA points to recent studies which estimate that bats eat enough pests to save more than $1 billion per year in crop damage and pesticide costs in the United States, mostly from the corn industry alone.

“Across all agricultural production, consumption of insect pests by bats results in a savings of more than $3 billion per year,” according to the US Fish and Wildlife Service.

“You wouldn’t have tequila if you had no bats, because that’s the only thing that pollinates the agave plant that makes tequila,” Magill said.

Bats are affected by the climate crisis in the same way butterflies and bees are.

“Bats are also more susceptible to heat stress,” Magill said. “There have been major die-offs of bats as a result of rising temperatures that led to death from heat stroke as bats have limited cooling mechanisms.”

Unlike butterflies and bees, though, bats aren’t just a vital pollinator — they are considered a major seed disperser and critical for our ecosystems, much like birds.

“The seeds from the fruits that they eat germinate after going through their digestive system and then are deposited throughout their range to ‘plant’ future trees,” Magill said.

How you can help
This is a global problem which means fixes need to be on a global scale, but there are still ways individual people can help.

“Plant gardens with native wildlife, the native plants that are critical to the survival of these animals,” Magill said.

Plants that are native will also require less care. If you plant a cactus in Louisiana, it’s not going to do well in the humid environment. Likewise, impatiens or begonias will not do well in the desert Southwest as they require a tremendous amount of water to flourish.

A new online database helps users in the UK find pollinator friendly plants for their gardens, and support biodiversity. Similar lists of native, pro-pollinator plants exist for the United States.

“When you plant native wildflowers, you’re planting a buffet for the wildlife that needs that to survive,” Magill says. “That’s the refueling stations for our pollinators.”

Magill points to Lady Bird Johnson’s effort to beautify roadsides in the US. While her goal was nationwide, her efforts shone in Texas.

“She did such a wonderful thing with wildflowers in Texas,” Magill says. “There are times you can drive through Texas, and you can see wildflowers for as far as the eyes can see, and it’s such a beautiful sight, because she understood the value of that.”

While other states are doing that along roadways as well, individual homeowners can also do the same.

“We have beautiful plant life in our native areas where we live in this country. If we could focus more on that and start rebuilding what was naturally here, we can start bringing back those natural rhythms.”

You can also work to reduce your pesticide and chemical use around your home. Good alternatives include using organic products such as compost for soil health and adding beneficial insects like ladybugs, praying mantises, or even nematodes to keep pests away.