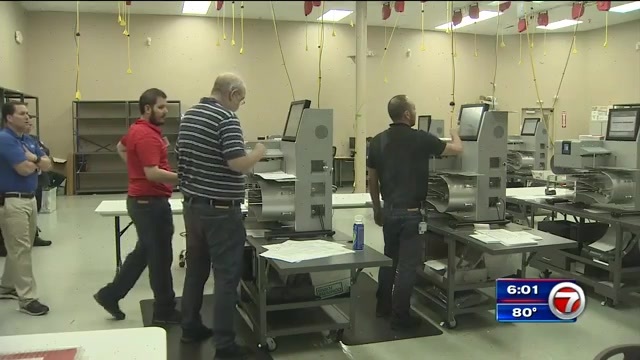 LAUDERHILL, FLA. (WSVN) - The ballot recount process that began this weekend across Florida got off to a rocky start in Broward County, as machine glitches led to rising tensions and claims of mismanagement aimed at the supervisor of elections.

By contrast, Miami-Dade elections officials continued the machine recount that they began on Saturday but not without criticism from the NAACP.

Tabulation machines were scheduled to be tested prior to beginning the recount at the Broward Supervisor of Elections Office in Lauderhill at 7 a.m. on Sunday. That process, which was supposed to take about an hour, is now expected to take up more than 30 hours after an unspecified malfunction prevented the recount from proceeding at the scheduled 8 a.m. start time.

Instead, Broward officials said, votes might not be tabulated until late afternoon on Monday.

Representatives from both the Democratic and Republican parties were on hand to observe technicians working on the problems.

Protesters who gathered outside the headquarters chanted “USA” and held up signs. Some questioned the validity of the process.

Workers in Lauderhill spent all day Sunday sorting out the first page from every Broward ballot, which has about 3.5 million pages in total. That page includes the three races being recounted: governor, U.S. senator and agriculture commissioner.

Meanwhile, it was smooth sailing for Miami-Dade elections officials on Sunday, as they continued the painstaking process of recounting hundreds of thousands of votes using nine high-speed machines.

But outside their headquarters in Doral, the NAACP had a message for them.

“The Miami-Dade branch of the NAACP wants to make sure that every vote is counted,” said NAACP spokesperson Darryl Holsendolph.

The NAACP representatives blasted elections officials after learning hundreds of mail-in ballots will be exempt from the final vote.

“We’ve already seen today, just out of the Opa-locka office, 266 votes that should’ve been counted not be counted,” said Dwight Bullard with the New Florida Majority.

But election officials said those mail-in ballots were received on Saturday and missed the 7 p.m. election night deadline.

Mitchell Berger, an attorney representing the Democratic Party, said that rule should be waived, especially after Opa-locka’s mail facility spent some time locked down. The mail distribution center was evacuated back in October after accused bomber Cesar Sayoc allegedly sent pipe bombs to high-profile Democrats that passed through the facility.

“There are votes on the floor in Opa-locka because of the bomber. That’s like a hurricane,” said Mitchell Berger, an attorney representing the Democratic Party.

He released a statement that reads, “On Election Day, we made three runs to the postal service to ensure Miami-Dade County had every ballot received by postal facilities on that date, and our staff worked overnight until 6 a.m. Wednesday to ensure that last batch of 15,000 mail-in ballots were counted.”

Legal Update: We’ve filed emergency motions and complaints in Broward and Palm Beach counties to ensure that we continue to do everything possible to prevent fraud and ensure this recount is operated responsibly. More info here: https://t.co/ClbLt1h9dq

Hours earlier, Florida Gov. Rick Scott announced he is suing Broward County to have all recount equipment monitored by law enforcement when not in use and have all votes submitted after a noon deadline on Saturday voided.

But, Berger said, as long as voters cast their ballots on time, it shouldn’t matter when their ballots arrived at the Lauderhill headquarters for counting.

“It depends when they were voted. The first clause of the Florida Constitution says, ‘We honor the vote,’” he said.

Despite no substantiated reports of criminal activity at the Broward Elections HQ, Florida Attorney General @AGPamBondi sends memo to FDLE and Dept. of State instructing them to “report any criminal activity” regarding the 2018 election.

The battle for Broward grows more contentious with each passing day. State Attorney General Pam Bondi issued a memo instructing the Florida Department of Law Enforcement to report any criminal activity at the Broward and Palm Beach Supervisor of Elections offices despite no confirmed reports of any criminal activity taking place.

Officials in Broward will be receiving two additional tabulation machines to help them reach Thursday’s recount deadline. The machines, expected to arrive Monday morning, will also have to be tested before they can be used in the recount.

When asked whether they think they’ll be able to make the deadline, Broward officials said they couldn’t comment one way or the other.