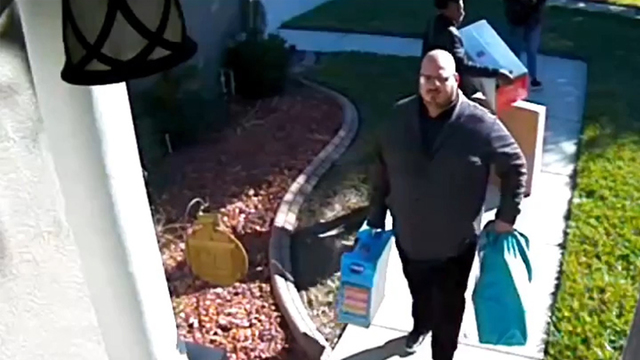 RIVERVIEW, Fla. (WSVN) — Package thefts usually increase around the holidays, but one man’s church family helped lift his spirits after porch pirates stole gifts he had ordered for his children.

But once Rivera’s church, River of Life Christian Center, heard about what had happened, several members decided to give back.

Just one day after the theft, two of his fellow churchgoers walked up to his front door with new gifts and diapers for Rivera’s kids, Fox 13 reports.

“Hey! Listen, hope your packages are coming back,” one man said with a smile as he looked up at Rivera’s surveillance camera on his porch. “But we just wanted to help you guys out.”

Once Rivera found the new packages by his front door, he said he called his wife and asked her to look at their cameras. When he saw who the “secret Santas” were, he then posted the video to his Facebook page.

“25hrs exactly after 2 ladies thought it would be ok to steal Christmas presents from my front door, my church family shows up at my front door unannounced showing Christ’s love,” Rivera wrote. “Christ is the reason for the season. These are the things that need to be remembered during this time and always.”

The women who stole the gifts still have not been found, Rivera said.