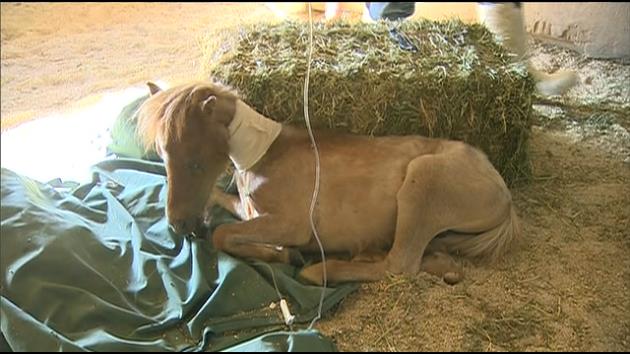 SOUTHWEST MIAMI-DADE, Fla. (WSVN) — The Society for the Prevention of Cruelty to Animals (SPCA) is currently caring for a blind baby pony after assisting in its rescue.

The pony was found Wednesday night on a property located in the area of Southwest 197th Avenue and 130th Street. The pony wandered in through the gate, fell and couldn’t get up.

The SPCA was called to the scene and saved the pony. "When we got there, the police had put him on a blanket and moved him into the shade and had given him water," said Laurie Waggoner, SPCA director of ranch operations.

The SPCA does not know who the animal belongs to, but they believe he is about a year old and was abandoned due to his condition. The pony also appeared to be malnourished. "If he makes it through the night, his condition is very guarded," said Waggoner. "Somebody took him out and dumped him out there. You know, he didn’t wander away from somebody. He’s been neglected for a long time."

The SPCA also helped another healthier pony that was found wandering the property. "It’s just unbelievable what humans are capable of doing or not doing for their animals. If you can’t afford the vet care for them, you shouldn’t have them," Waggoner said.

He is currently being treated at the SPCA ranch, located at 24650 SW 167th Ave. in Southwest Miami-Dade, where a vet has started him on fluids and a drip.

The second pony found is thought to be the mother of the blind pony.

If you would like to donate to help the SPCA, go to http://www.spca-sofla.org.