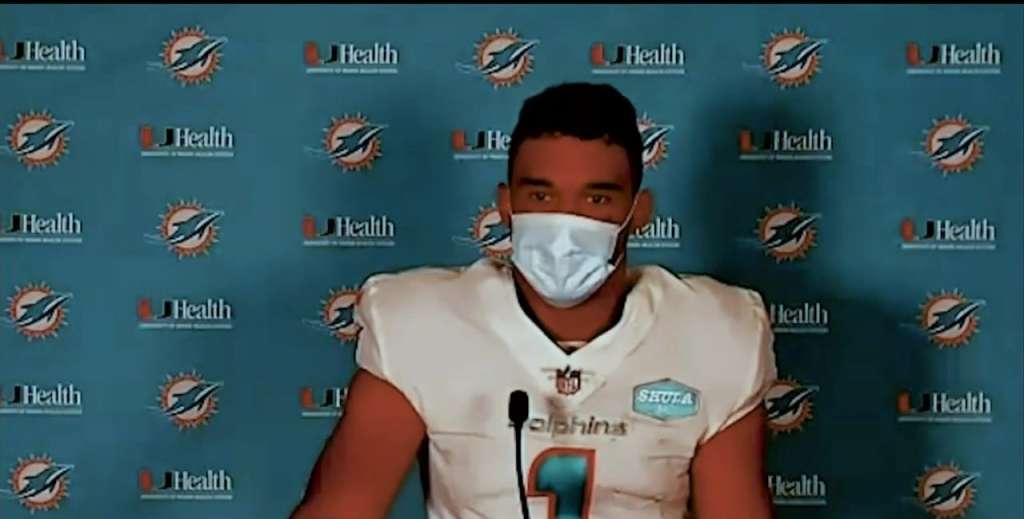 GLENDALE, Ariz. (AP) — The first professional matchup of Tua Tagovailoa and Kyler Murray certainly lived up to the hype.

The two young quarterbacks traded pinpoint passes, timely scrambles and other big plays in a dazzling show of the league’s future. In the end, it was the rookie who came out with the win.

The 22-year-old Tagovailoa threw for 248 yards and two touchdowns in just his second NFL start as the Miami Dolphins rallied in the fourth quarter for a 34-31 victory over the Arizona Cardinals on Sunday.

“That was awesome. It was fun for the fans as well, not just us competing,” Tagovailoa said of the duel with Murray. “You know what you’re going to get when it comes to Kyler. You know the kind of explosive player he is. He might be the fastest player in the NFL right now. Oh my gosh, he’s faster than me.”

But Tagovailoa was the winner. He’s 2-0 since taking over for Ryan Fitzpatrick as the starter following the team’s bye week.

Murray, the 2019 Offensive Rookie of the Year, finished with 283 yards passing and three touchdowns, adding 106 yards rushing on 11 carries in another stellar performance. He was obviously frustrated the Cardinals couldn’t score in the fourth quarter and watched the Dolphins score 10 unanswered points for the victory

Arizona’s Zane Gonzalez was short on a 49-yard field goal attempt that would have tied the game with 1:53 left.

Murray paused for several seconds before answering a few postgame questions, struggling for a response.

“We came out here and laid an egg,” Murray said.

Tagovailoa was much more productive in his second start after throwing for just 93 yards against the Rams last week. He showed great poise during two scoring drives in the fourth quarter. The left-hander also made some plays with his feet, extending drives with scrambles. He finished with 35 yards rushing.

“Tua did his part,” Miami coach Brian Flores said. “It wasn’t a perfect game. He made some mistakes, like we all did. But he fought back. We fought back as a team.”

This matches the Dolphins’ best record at the halfway point since 2001 and the four-game winning streak is their longest since 2016.

Miami had a 24-17 halftime lead but Arizona tied the game early in the third quarter on Murray’s 21-yard pass to tight end Darrell Daniels, who snatched the ball away from cornerback Byron Jones as the two tumbled to the ground in the end zone.

The Cardinals pushed ahead 31-24 late in the third quarter on Murray’s 12-yard run. It was the seventh time in eight games the quarterback has thrown and run for at least one touchdown.

But the Dolphins and Tagovailoa fought back on the next series, delivering an impressive 10-play, 93-yard drive that ended with an 11-yard touchdown pass to Mack Hollins. Miami pushed ahead 34-31 with 3:30 left on a 50-yard field goal by Jason Sanders.

“I don’t think any moment is too big for Tua,” Miami center Ted Karras said. “He has gained the respect of everyone in that huddle, and we want to go to battle for him and keep winning games.”

Miami came in allowing the fewest points per game in the NFL and the defense supplied seven of its own in the first quarter. Murray was scrambling on third down when Emmanuel Ogbah smacked the ball out of his hands. Shaq Lawson scooped up the fumble and ran 36 yards for a 7-0 lead.

Murray played much better after that costly miscue, throwing for 151 yards and two touchdowns while also running for 52 yards in the first half.

Sanders made a 56-yard field goal as time expired in the second quarter to give the Dolphins a 24-17 halftime lead. It was the longest field goal of his three-year pro career.

Sanders has made 20 consecutive field goals, a franchise record.

The Dolphins had five assistant coaches unavailable on Sunday because of COVID-19 protocols.

“The protocol said those coaches had to be out,” Flores said. “Nothing is more important than the health of this team. We’re going to do everything possible to contain the virus. We all know there is a pandemic. The infections are going up. We’re trying to do everything we can.”

Dolphins: WR Preston Williams (foot) left the game in the second quarter and didn’t return. … TE Durham Smythe was evaluated for a concussion in the second half.

Cardinals: CB Kevin Peterson left the game early in the second quarter for a concussion evaluation and didn’t return. Arizona was already playing without starting CB Dre Kirkpatrick, inactive with a thigh injury.

Dolphins: return home to host the Chargers next Sunday.

Cardinals: host the Bills next Sunday.