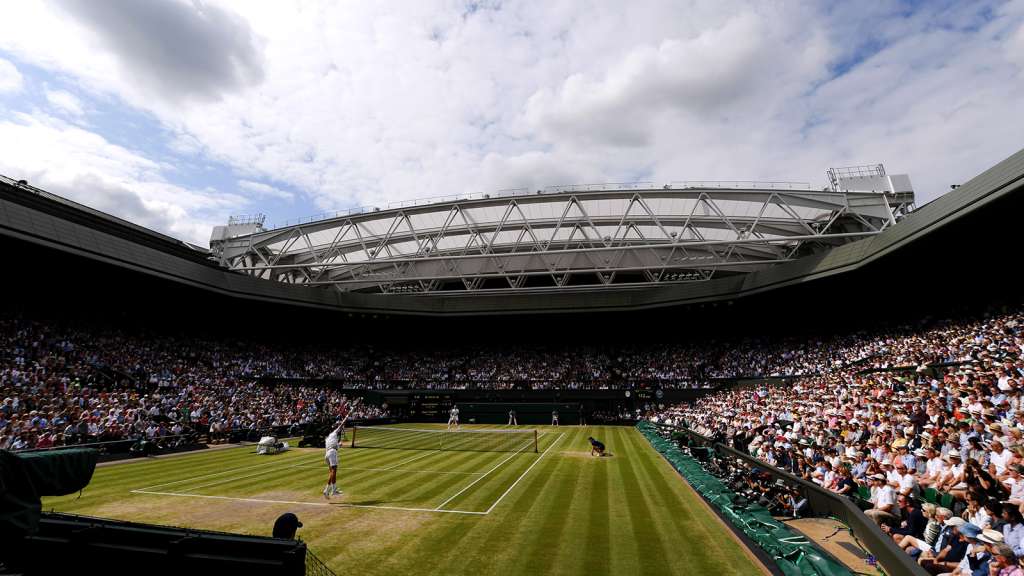 LONDON, ENGLAND - JULY 14: General view inside Centre Court in the Men's Singles final between Roger Federer of Switzerland and Novak Djokovic of Serbia during Day thirteen of The Championships - Wimbledon 2019 at All England Lawn Tennis and Croquet Club on July 14, 2019 in London, England. (Photo by Matthias Hangst/Getty Images)

(CNN) — Wimbledon organizers announced on Wednesday that Russian and Belarusian players will not be allowed to compete at this year’s grand slam following Russia’s invasion of Ukraine.

“Given the profile of The Championships in the United Kingdom and around the world, it is our responsibility to play our part in the widespread efforts of Government, industry, sporting and creative institutions to limit Russia’s global influence through the strongest means possible,” the All England Lawn Tennis Club (AELTC) said in a statement.

“In the circumstances of such unjustified and unprecedented military aggression, it would be unacceptable for the Russian regime to derive any benefits from the involvement of Russian or Belarusian players with The Championships.

“It is therefore our intention, with deep regret, to decline entries from Russian and Belarusian players to The Championships 2022,” it added.

The Kremlin said earlier on Wednesday that a ban on Russian players taking part at Wimbledon as a result of Russia’s invasion of Ukraine is “unacceptable.”

Government spokesman Dmitry Peskov was responding to a question concerning the barring of Russian and Belarusian players from the tournament which was reported by The New York Times, before AELTC officially made its statement.

“Making athletes victims of some kind of political prejudices, intrigues, hostile actions towards our country, is unacceptable. One can only express regret here,” Peskov told a conference call with reporters.

“Considering that Russia is after all a very strong tennis country, our tennis players are in the top lines of the world ranking, the competition itself will suffer from their removal.

“I would like to wish the guys to do everything in order not to lose shape and not lose their world tennis class.”

The ban on Russian players will prevent several high ranked players from competing at the iconic grass court grand slam.

Russia has five women in the top 40 of the WTA Tour rankings.

The AELTC’s decision is the first time Russian and Belarusian players have been prohibited from competing in an elite tennis event.

However, individual players are allowed to compete on the ATP and WTA Tours but not under the name or flag of their countries.

On Wednesday, Ukrainian tennis players Marta Kostyuk, Elina Monfils and Lesia Tsurenko called for a total ban of Russian and Belarusian players who fail to denounce Russia’s invasion of Ukraine.

They posted a letter on social media addressed to the “Tennis community” calling for fellow players to use their platform to speak out.

“As athletes we live a life in the public eye and therefore have an enormous responsibility. Some of our posts and opinions reach an audience larger than those of regional television stations. In times of crisis, silence means agreeing with what is happening,” it read.

“We noticed that some Russian and Belarusian players at some point vaguely mentioned the war, but never clearly stating that Russia and Belarus started it on the territory of Ukraine.

“The very silence of those who choose to remain that way right now is unbearable as it leads to the continuation of murder in our homeland.”

They go on to demand the sport’s governing bodies ask players whether they support the Russian invasion and exclude those who do from competitions in the future.

Wimbledon, the third grand slam of the year, is set to begin on Monday, June 27.