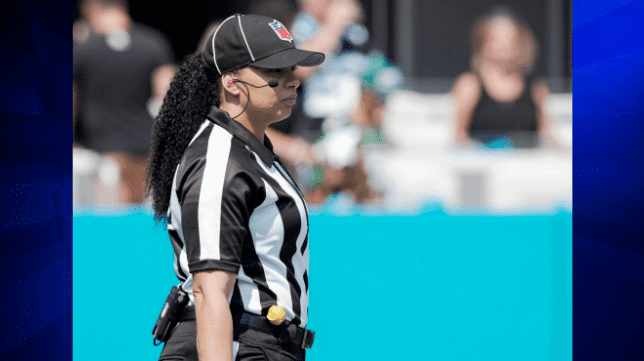 (CNN) — Maia Chaka made history on Sunday, as she became the first Black woman to officiate an NFL game.

“This historic moment to me is an honor and it’s a privilege that I’ve been chosen to represent women and women of color in the most popular sport in America,” said Chaka in a video tweeted by the NFL.

Officiating in Sunday’s New York Jets at Carolina Panthers in Charlotte, North Carolina, Chaka is the third on-field female official in the NFL, joining Sarah Thomas, the first permanent female game official, and Shannon Eastin, who was the first woman to officiate an NFL game.

Chaka, a health and physical education teacher, spent time as a referee in the NCAA’s Pac-12 conference and Conference USA, as well as in the short-lived Alliance of American Football in 2019.

She entered the NFL’s Officiating Development Program in 2014, a program designed to offer top officiating prospects in the collegiate ranks “exposure to in-game experiences that NFL officials face, to determine if they have the ability to succeed,” according to the NFL.

The NFL announced in March that it was adding Chaka to its roster of game officials for 2021.

“Hopefully, that just gives somebody else some inspiration and empowers them to step outside the box and do something different,” Chaka said in the video.