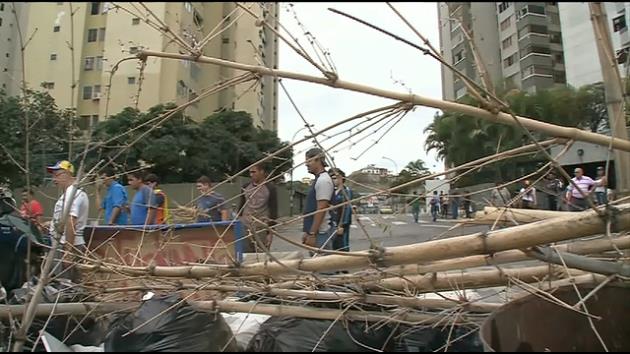 “Obama can’t let himself be taken by the Miami lobby,” Maduro said. “I call on the United States to take it easy. They’re taking President Obama to an abyss and he’s going to end up crashing.”

Anti-government street protests by Venezuelans fed up with soaring inflation, violent crime and shortages of basic items such as flour and cooking oil have roiled Venezuela for more than a month. The Venezuelan government says at least 25 people have died in the turmoil since Feb. 12.

Daily street protests have rocked parts of the capital and other cities. After three people died in the central city of Valencia Wednesday, Maduro said he was stepping up security operations and called on the National Guard to begin searching buildings in areas where violence erupts.

Since the start of the protests, the government has accused the U.S. of trying to overthrow his government. Last month, Venezuela expelled three U.S. diplomats, accusing them of organizing students to participate in anti-government protests.

“Each time we’re about to isolate and reduce the violence, out comes Mr. Kerry to speak,” and up go the barricades and the violence, Jaua said.

On Thursday, Kerry told a congressional committee that the U.S. was looking for a way to get Maduro to engage in dialogue with his own people and respect human rights.

Destabilizing the Venezuelan government would have “unbearable consequences” for the United States, Maduro said. And if Venezuela were destabilized, it would bring “the worst period of political and economic instability in Latin America.”

Maduro also said Friday that any foreign airlines that reduced or suspended flights in and out of Venezuela would face severe measures.

“There’s no excuse for airlines to reduce flights to Venezuela,” he said. Airlines have struggled under a $3.3 billion debt owed by the government. He said any airline that left would not be allowed back as long as he’s in power.