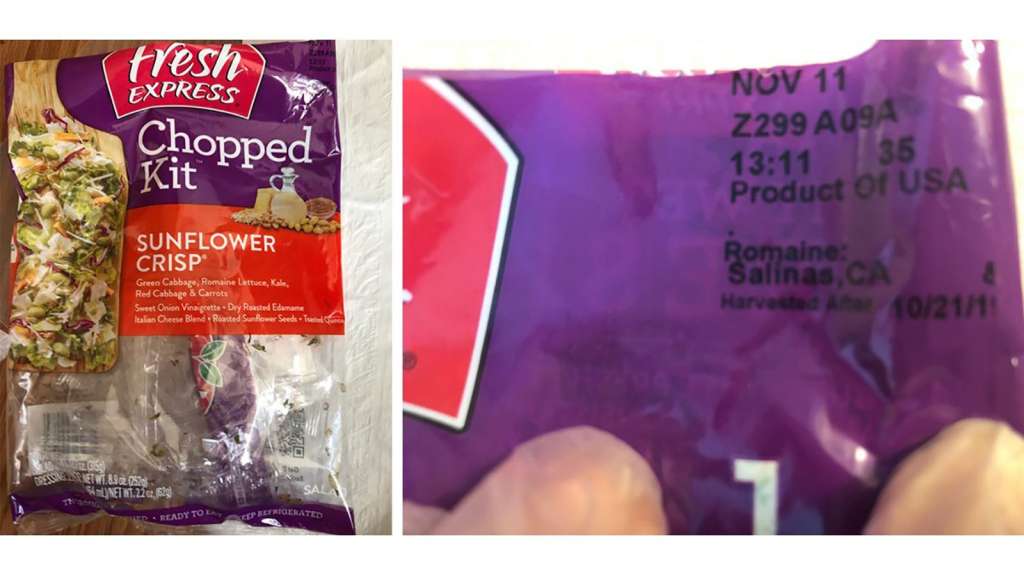 As of December 9, eight people from three states were infected with the strain identified in the outbreak, the CDC said. Three were hospitalized, including one person who developed kidney failure.

There were no deaths.

This outbreak is caused by a different strain of E. coli than the other current outbreak linked to romaine lettuce grown in the Salinas, California region, which has over 100 reported cases of infection, though the CDC is investigating a link.

Consumers, restaurants and retailers should not sell or consume any of the salad kits with a best-before date up to and including December 7, 2019, and with the identification code UPC 0 71279 30906 4, beginning with lot code Z, the CDC says.

You can find the code on the top right corner of the front of the bag.

If you do have the product, the CDC says to throw it away, even if some of the salad has already been eaten and nobody got sick. The health agency also recommends washing and sanitizing drawers or refrigerator shelves where the product was stored.

Symptoms of an E. coli infection

Symptoms of an E. coli infection include severe stomach cramps, diarrhea and vomiting, according to the CDC. Some people may also get a low fever.

People usually get sick two to eight days after consuming the E. coli germ, and some infected people may get a certain type of kidney failure, as well.

The health agency recommends seeing a healthcare provider if these symptoms occur. It also says to take action by writing down what you ate the week before you got sick and reporting the illness to a local health department. Wash hand thoroughly after changing diapers, using the toilet, and before preparing food to avoid infecting others.

The CDC, along with the FDA and public health and regulatory officials in several states are investigating the outbreak, which also includes illnesses in Canada.

Officials are interviewing infected people about what they ate and were exposed to before their infection. Of those who have shared information, 100% reported eating a leafy green before the illness started, and six reported possibly eating a Fresh Express Sunflower Crisp chopped salad kit.

The investigation has not yet determined which salad ingredient was contaminated, but initial information suggests that romaine lettuce in the kits likely came from the Salinas growing region where the other existing outbreak originated.