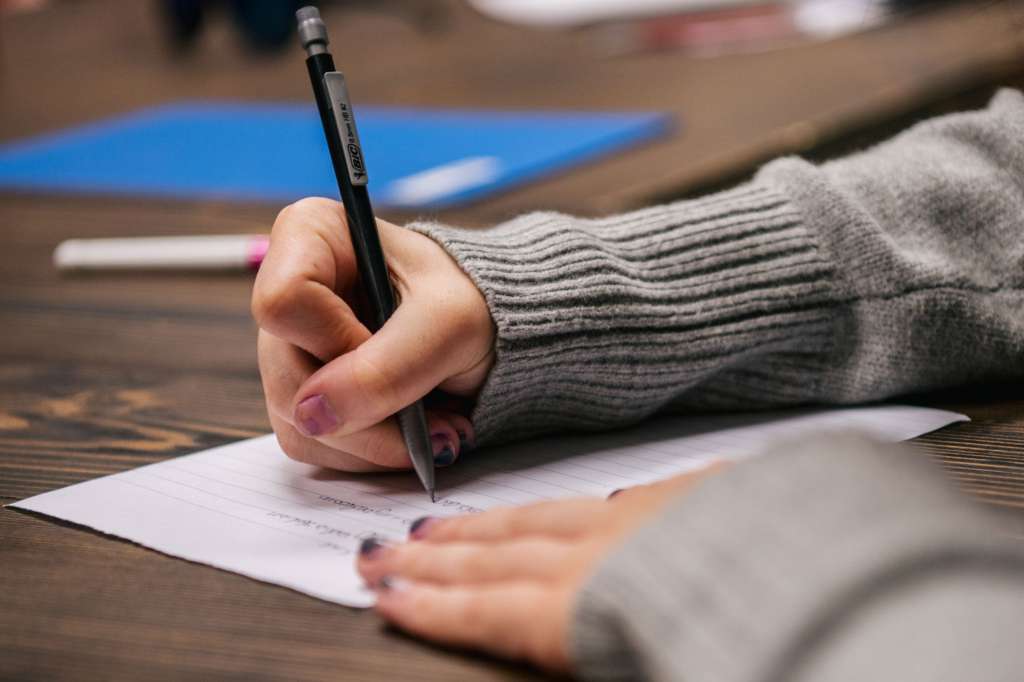 HOUSTON, TEXAS - AUGUST 23: A student takes notes during instruction at the Xavier Academy on August 23, 2021 in Houston, Texas. In-person classroom sessions are resuming and schools around Houston are requiring mask mandates, keeping in accordance with CDC guidelines. Harris County Judge Lina Hidalgo has gone against Gov. Greg Abbott's statewide ban on mask mandates and has issued an order that requires face coverings to be worn in schools. All staff and faculty at Xavier Academy have been vaccinated and 90% of students in attendance have also been vaccinated. (Photo by Brandon Bell/Getty Images)

(CNN) — A school district superintendent in North Texas apologized Thursday night after one of the district’s administrators told teachers that if they have books about the Holocaust in their classroom libraries, then they should also include books that have “opposing” views of the Holocaust.

At a training session last week, a school administrator with Carroll ISD in Southlake, Texas, tried to advise elementary school teachers on how to follow new district guidelines for the vetting of books. The guidelines were issued in an attempt to align with a controversial law in Texas that seeks to restrict discussion of race and history in schools.

The training session was first reported by NBC News. After teachers expressed frustration and confusion over the new guidelines, Gina Peddy — executive director of curriculum and instruction for the district — invoked the Holocaust as an example of a historic event that would require a teacher to keep on hand other books with “opposing” views.

Audio of the exchange was secretly recorded by a staff member and obtained by CNN. CNN has reached out to Peddy for comment but has not gotten a response back.

“Just try to remember the concepts of (Texas House Bill) 3979,” Peddy says, referring to the new law, known as HB 3979. “And make sure that if you have a book on the Holocaust, that you have one that has opposing, that has other perspectives.”

“How do you oppose the Holocaust?” one teacher could be heard asking.

“Believe me,” Peddy said in a longer recording obtained by NBC. “That’s come up.”

The exchange, according to a source who was there, happened in a hallway amid a smaller group of staff after the training session had ended.

A report by NBC News on the comment sparked an uproar on social media, and the district’s superintendent, Lane Ledbetter, issued an apology to the community:

“I express my sincere apology regarding the online article and news story released today. During the conversations with teachers during last week’s meeting, the comments made were in no way to convey that the Holocaust was anything less than a terrible event in history. Additionally, we recognize there are not two sides of the Holocaust,” the statement read.

“As we continue to work through implementation of HB 3979, we also understand this bill does not require an opposing viewpoint on historical facts. As a district we will work to add clarity to our expectations for teachers and once again apologize for any hurt or confusion this has caused,” it said.

State law was catalyst for discussion

At the heart of the incident is confusion over the law which limits conversations about race and history in schools.

Laws introduced in state legislatures such have these have been driven largely over the potential teachings of critical race theory, a hot-button issue for some parents.

Critical race theory recognizes that systemic racism is part of American society and challenges the beliefs that allow it to flourish. While the theory was started decades ago as a way to examine how laws and systems promote inequality, it has taken on new urgency since a series of killings last year of Black Americans by police officers, which led to a national reckoning on race.

Critics have slammed the theory, with conservatives accusing it of poisoning discussions on racism.

HB 3979 in Texas, which was signed by Gov. Greg Abbott and took effect on September 1, states that a teacher may not be compelled to discuss “a particular current event or widely debated and currently controversial issue of public policy or social affairs.”

If a teacher does engage in that kind of discussion, the teacher is required to “explore such issues from diverse and contending perspectives without giving deference to any one perspective.”

Carroll ISD had previously issued the rubric for teachers on how to vet the books in their classroom libraries, but many teachers found it confusing, the source told CNN. Several teachers were also upset about a fourth-grade teacher being reprimanded by the district’s school board just days earlier for having “This Book Is Anti-Racist” by Tiffany Jewell in the classroom, the source said.

The reprimand, which came after a parent complaint, made national news and contributed to a sense of deep frustration among some teachers, especially since the new Texas law addresses curriculum, not classroom libraries.

At the meeting last week, teachers were vocal about their concerns, according to the source in the room.

“The teachers were so angry,” the source said. “They stood up and yelled and fought back in a way that was frightening but also empowering.”

The source said teachers raised multiple questions at the meeting about the new vetting guidelines and after receiving mixed messages from the district over whether to keep their classroom libraries open during the vetting process. Peddy, according to the source, went to seek clarification from other administrators. Peddy returned and, after the training session was over, made the Holocaust example in the hallway as teachers were leaving.

According to audio played for CNN, Peddy pledged to stand by the teachers as they began the vetting process.

“I know you feel like you’re being put at risk, I do know that. Just leave them open,” she said, referring to the classroom libraries. “Look through the whole book, but leave your libraries open while you do it. I know that you have the best interests of your kids in mind and we’re going to stand behind you.”

Clay Robison, spokespeson for the Texas State Teachers Association said he was angered by the comments made in the audio recording about including opposing views of the Holocaust.

“I was angry,” he said in a phone interview with CNN. “But, also, I wasn’t terribly surprised.”

Robison noted that while the law does not specifically deal with books in teachers’ classrooms or specifically require a teacher to give equal weight to perspectives that deny the Holocaust, he said the law has enough ambiguity to “encourage that kind of reaction.”

Robison said the Texas State Teachers Association has long opposed the bill because it is open to misinterpretation and can cause confusion for educators. Robison said teachers across the state are “angry” and fear consequences over the books they include in their classrooms.

“It doesn’t require these teachers to pull these books off their shelves, but it certainly encourages parents who don’t like those books — who feel uncomfortable with those books — to put pressure on their school boards and their school administrations to…pull the books off.”

Since the law took effect six weeks ago, Robison said the incident in Southlake is just one example of the confusion and frustration that he expects to see as the school year continues, not to mention the expected political battles.

“School board presidents run for election. And this is an issue that could figure very prominently in school board elections, particularly conservative communities,” he said.