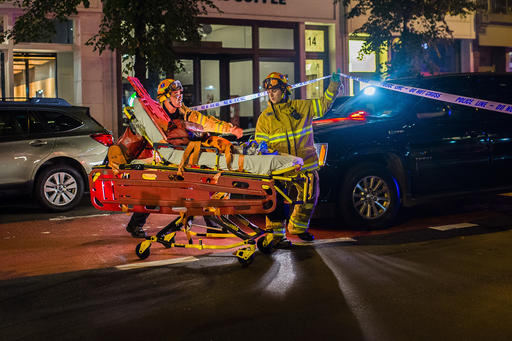 Firefighters arrive at the scene of an apparent explosion in Manhattan's Chelsea neighborhood, in New York, Saturday, Sept. 17, 2016. A law enforcement official tells The Associated Press that an explosion in the Chelsea neighborhood appears to have come from a construction toolbox in front of a building. The official spoke on condition of anonymity because the person wasn't authorized to speak about an ongoing investigation. Police say 26 people have sustained minor injuries in the explosion on West 23rd Street. (AP Photo/Andres Kudacki)
Associated Press

NEW YORK (AP) — Federal prosecutors boosted their case Wednesday against a man charged with setting off bombs in New Jersey and New York that injured 30 people, bringing additional charges in an indictment and subjecting him to a potential mandatory life-in-prison penalty if he is convicted.

The eight-count indictment in Manhattan federal court speeds the case along against 28-year-old Ahmad Khan Rahimi. He has been held without bail in the Sept. 17 attacks since his arrest two days afterward when he was shot by police in a shootout outside a Linden, New Jersey, bar.

The bombings included the evening explosion of a bomb in Manhattan’s Chelsea neighborhood that injured 30 people and the detonation of a pipe bomb along a Marine Corps Charity race in Seaside Park, New Jersey earlier in the day.

Rahimi is scheduled to enter a plea to the indictment during a court appearance Thursday.

The new bombing charges in the indictment were added to charges already lodged against him in a federal complaint in New York. If convicted of all counts, he would face a mandatory life prison sentence.

He also faces the potential for a mandatory life prison sentence in a case brought against him in Union County, New Jersey. Authorities announced Wednesday that a grand jury there had handed up an indictment charging Rahimi with 30 counts, including attempted murder of a law enforcement officer, aggravated assault and weapons offenses stemming from the Sept. 19 shootout. He is charged with shooting one officer in his protective vest. Another officer was struck in the head by a bullet fragment. Neither injury was life threatening.

One of his lawyers said at an initial appearance for the Elizabeth, New Jersey, resident last week in Manhattan, where he will face trial first, that he will plead not guilty to any federal indictment. Assistant Federal Defender Sabrina Shroff declined comment after the indictment was returned Wednesday.

In a release, Manhattan U.S. Attorney Preet Bharara noted that the Chelsea bombing shattered windows hundreds of yards away and propelled a 100-pound dumpster over 120 feet.

Until last week, the Elizabeth man remained in a New Jersey hospital or jail facility recovering from his gunshot wounds.