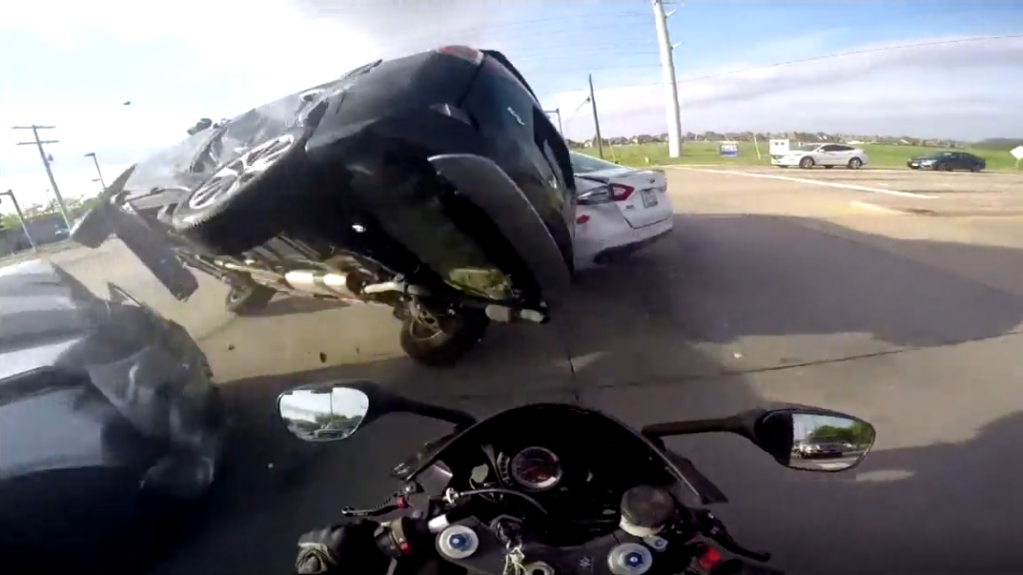 A motorcyclist in Texas miraculously managed to walk away from a bad wreck, but the footage his GoPro camera captured has quickly gone viral.

Malik Elizee was at a red light in Plano on Saturday along with several other vehicles, WFAA reports. When their light turned green, they all drove forward, but an oncoming Camaro ran a red light, plowing into an SUV and another car in front of his motorcycle.

Elizee’s motorcycle crashed into the cars, sending his bike flying through the air. Somehow he managed to grab onto the bottom of the SUV, likely saving himself from far more serious injury.

“I don’t know how to describe what I did, it was almost like I was flailing my legs to kind of run forward to avoid being crushed,” he said.

Video from his helmet’s GoPro camera captured the terrifying crash, and showed him running toward the grass immediately afterward and collapsing onto the ground.

Elizee said that, along with the helmet, he was wearing gloves and a jacket, which helped him not get scraped too badly on the roadway.

“I was definitely lucky to get out without having to go to the hospital, getting crushed between the two cars, or run over by the Camaro,” Elizee said. “That was a reality check.”

Amazingly, Elizee said no one was seriously injured in the multi-vehicle wreck.