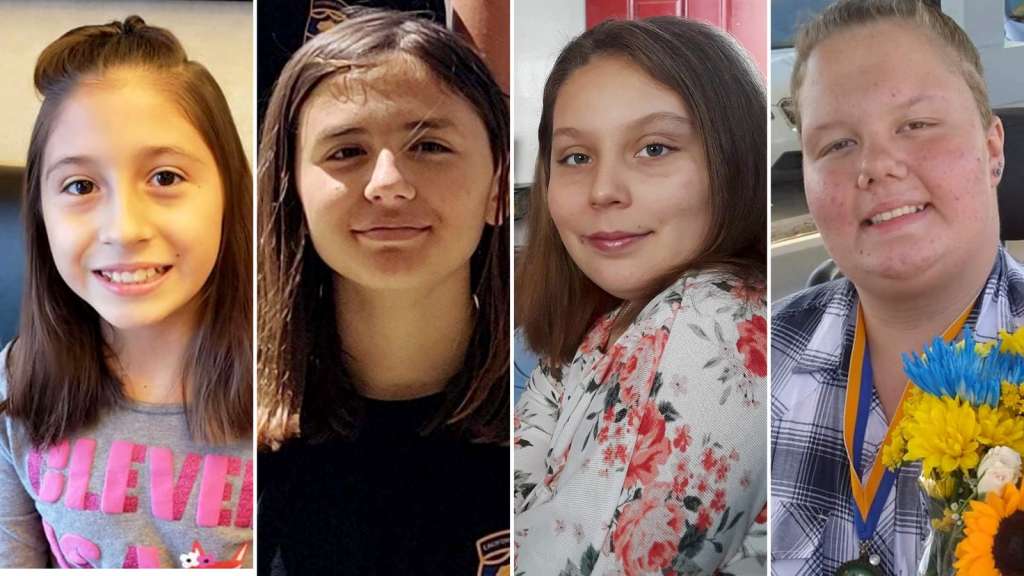 From left, Daytona Bronas, 12, Sandra Mizer, 13, and Willow Sanchez, 11 were killed in the crash. Natalie Coe, 14, is in the ICU at a local hospital. (Courtesy: LVUSD Superintendent)

(CNN) — Three girls were killed and a fourth is in critical condition after a hit-and-run driver struck the group, two of whom were in wheelchairs, as they walked along a rural San Bernardino County road Saturday night, according to the California Highway Patrol (CHP).

Bronas and Coe were in wheelchairs, according to Livingston. He said Sanchez had just returned after a year away. The other girls attended Lucerne Valley Middle High School.

The four girls were on Camp Rock Road at Rabbit Springs Road in Lucerne Valley when they were hit after 10:19 p.m., according to a news release from the CHP. The driver and passenger of a white 2002 Chevrolet Silverado hit them from behind and then fled the scene on foot. The CHP says it is unclear if drugs or alcohol were factors in the crash and the investigation is ongoing.

“We’re still trying to figure out who was actually driving that Chevy Silverado,” said CHP Officer Ramon Duran to CNN affiliate KABC. “They obviously knew what they did and they made the decision to flee from the scene instead of rendering aid to those four juveniles and that is just mind-blowing that somebody would do that.”

“This is a horrific tragedy, the Lucerne Valley Unified School District is in shock at this terrible event,” Livingston said to CNN. “We are calling for whoever did this to turn themselves in. Anyone who runs from the scene of an accident like this is not human and needs to brought to justice.”