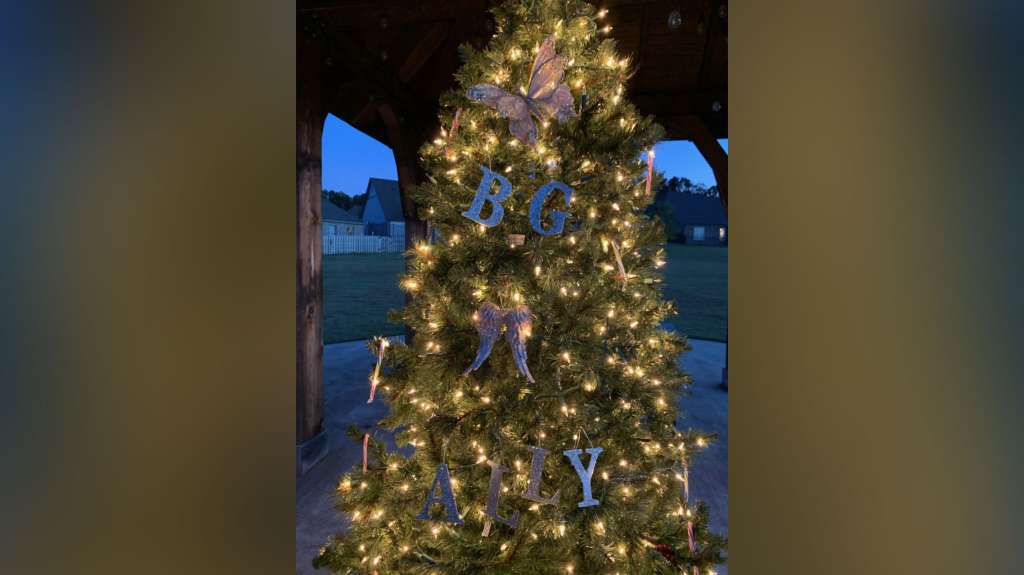 (CNN) — When neighbors found out that 7-year-old Ally Cheek’s health was declining and she might not live through the holidays, they decided to start Christmas early in Vestavia Hills, Alabama.

Her neighborhood banded together in early November to light up their homes so Ally and her family could celebrate Christmas together one more time.

Ally has a rare genetic mutation, called HECW2, which creates special developmental needs that have been getting progressively worse. It is so rare there are only about 50 diagnosed patients in the world. One of those patients was her twin sister, Bailey Grace, who passed away last year.

The girls’ mother, Morgan Cheek, said the Christmas lights have been a source of literal light in a dark time.

“For me, in seven and a half years of twins with medically fragile needs, and burying my first child, and then starting hospice with my second daughter shortly after … I think having that reminder from so many people that the light does always shine in the darkness has just been such a beautiful reminder for us as a family,” Cheek told CNN.

Cheek said the flurry of early decorating came about after she told a neighbor that Ally was continuing to decline but wanted to see the Christmas lights one more time.

“I think we’re actually going to put up our Christmas lights this week, so don’t judge us if you see our lights up,” she remembers saying.

Just an hour later, the neighbor came back to say that several more families on their street loop also wanted to put up lights early. Others in their close-knit community started asking if they could follow suit, and soon the entire neighborhood was filled with Christmas joy in November — with many houses putting Ally’s name in lights.

After photos of the twinkling neighborhood and the hashtag #LightingTheLoop went viral, other neighborhoods across the country chimed in with their own early Christmas cheer in honor of the Cheek family.

“The next thing I know, I’ve got Christmas wreaths coming in from Italy and Spain and Peru and Switzerland,” Cheek told CNN, adding that families of all faiths have shown them support by decorating.

The Christmas spirit also made it to actress Kristen Bell (she portrayed Princess Anna in “Frozen,” one of Ally’s favorite musical movies) who lit up her tree with a heart for Ally.

“I am thinking of you, and hoping that you are cozy and happy and in your parents’ arms,” Bell said in a video message to the 7-year-old girl. Ally’s mom said she recognized Bell’s voice from the songs in the film.

One neighbor lent the Cheek family their golf cart, so they can ride around her street to see all the lights even as her condition weakens.

“For some reason, music and lights are two things that she continues to be able to enjoy. We have been able to wrap Ally up in like a billion blankets, and get (her brother) in the back and just ride around and listen to Christmas music while Ally gets to see the lights,” said Cheek.

Because of her rare genetic condition, Ally and her sister were never able to walk or speak. Despite suffering from the seizures and food digestion issues that come with Ally’s terminal variant of HECW2, her mom said she is able to interact through waves and hugs, and she can speak with her eyes.

Ally also has a gift for spreading joy with her singing — and seeing the early Christmas cheer has prompted her sing loud for all to hear.

“It’s not the most in tune singing ever, so you can hear it probably from your house,” Cheek said. “I think it’s such a sweet gift for the people who have chosen to put up their lights, because you know when Ally is coming by.”

Grief at the holidays

Cheek has written two books about her family’s story, grief, and the loss of a child. She said being able to help others deal with grief has given her a mission in hard times and given her a way to honor her daughters lives.

“I mean, laugh and cry within in a two-minute span,” Cheek said. “I’ve learned to be able to mourn and rejoice … You have to be able to embrace both in this life.”

November is hospice care month, and the National Hospice and Palliative Care Organization (NHPCO) has a wealth of online resources for the families of those in hospice care who are dealing with grief and loss, especially surrounding the holiday season.

“Holidays are those times of the year often bring thoughts of families being together and joy and celebration, but when someone has lost a loved one, the feelings of loss can sometimes be emphasized when the holidays come around, even if the loss goes back a while,” said NHPCO spokesman Jon Radulovic.

“One of the best things you can do if you have a friend who might be suffering the loss of a loved one is to be willing to lend an ear and listen to them,” he added. “Sometimes people think that if I don’t mention it, they won’t feel bad, but generally it’s OK to touch base and be honest and direct with loved ones.”

This year, hospice care workers and end-of-life facilities are facing even more difficulties due to the coronavirus pandemic.

“COVID does complicate everything a little bit this year because there’s a larger shadow of grief that has been cast globally, which I think people are just starting to come to terms with,” Radulovic said.

The NHPCO said in a 2020 report that 1.5 million Americans who are on Medicare were enrolled in hospice care for one day or more in 2018, according to the most recent data available.

The organization notes that reliable statistics for children who receive palliative care and hospice care are hard to determine based on current data. The NHPCO estimates that hospice patients under 35 years old made up only 0.8% of those served in 2013 — the most recent year for which data is available.

Cheek said being the parents of children with special needs or children in hospice care makes life both more complicated and more simple.

She added that the gift of the early Christmas lights for Ally has been incredibly joyful for both the givers and the receivers.

“Our neighbors will tell you it’s been a gift for them too,” Cheek said. “Really at the end of the day, Christmas is about God being with us and in our hearts, and these are the things that we really appreciate the most.”