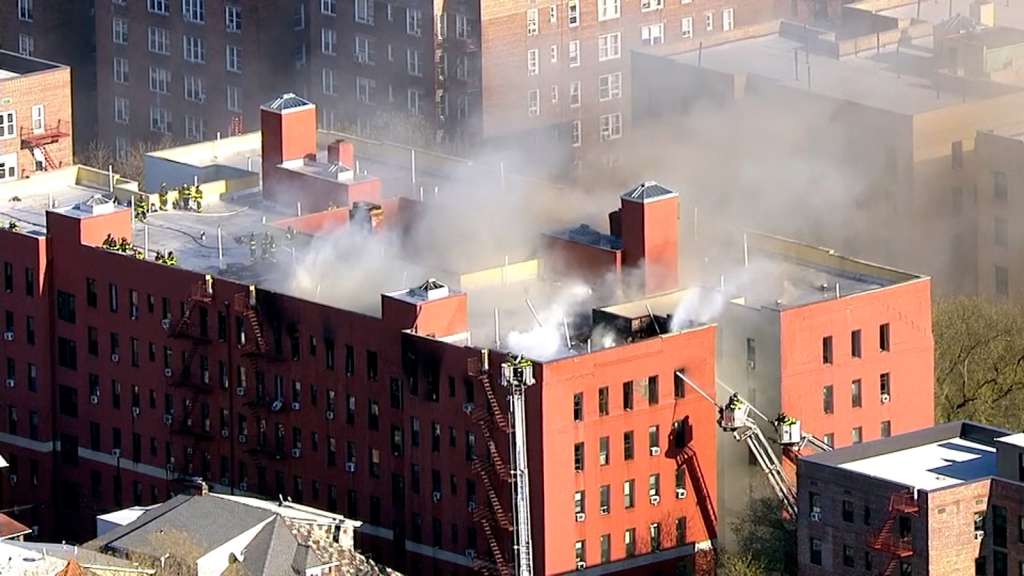 (CNN) — Over 350 firefighters battled an eight-alarm fire that tore through an apartment building in Queens, New York, on Tuesday.

A total of 21 people were injured in the fire, according to the Fire Department of New York (FDNY) Deputy Assistant Chief Michael Gala. The injured includes 16 firefighters, two who suffered burns, and five civilians, according to Gala. None are facing life-threatening injuries.

The building houses around 150 apartments, according to Gala. About 240 people, or 90 families, have been displaced by the fire, Gala said. The Red Cross is on scene and assisting those families.

The fire was found in an apartment on the sixth floor of the building and quickly spread to the area between the apartment ceiling and the roof, known as the cockloft, according to the FDNY.

The occupant of the apartment fled the fire and left the door open, according to FDNY. Because the door was left open, the fire spread out into the hallway and spread much more rapidly, according to the FDNY. The fire has consumed one side of the building, said Gala.

Video from the scene shows thick smoke rising from the roof of the red building in the Jackson Heights neighborhood.

“Everybody was panicking, all you see is the smoke,” resident Edwin Martinez told CNN affiliate WABC. “When you came out of the building, you couldn’t see anything. it was just all gray.”

Another resident, Kimberly Singhi, said she “got scared, because everything went black.”

“I grabbed my mom, I grabbed my dog and the pets we have, and we just ran out,” Singhi told WABC.

FDNY continues to battle the fire from the outside. The cause and origin of the blaze will be determined by the fire marshal when they can get into the building, fire department officials said.

First responders will probably be on-scene at least through the night, Gala said. In a post on FDNY’s Instagram page, Gala described this is a “very complicated and prolonged operation.”

While giving updates at the scene, fire officials emphasized the importance of closing doors if a fire breaks out in your residence. This helps prevent the fire from spreading.

“We’ve stressed over the years the seriousness of that if you do unfortunately have a fire in your home or apartment, how important it is to close that door,” FDNY Commissioner Daniel Nigro told CNN affiliate WABC.