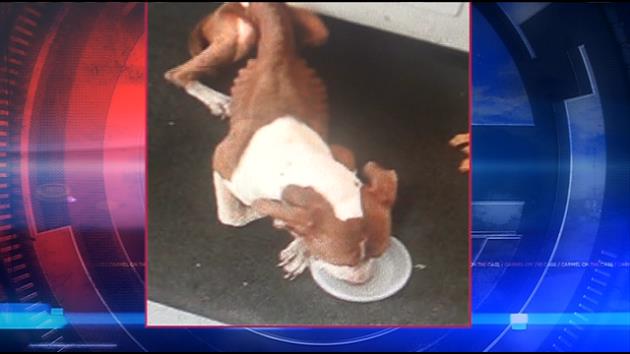 WSVN — A South Florida rescue group is being challenged tonight by a woman who says it refuses to return her family’s dog. Investigative reporter Carmel Cafiero is On the Case.

There is no doubt Trina, a pit bull, was near death when she was found running the streets in Fort Lauderdale. She was saved by a Good Samaritan and turned over to a Broward rescue group.

And there is no doubt Trina recognized Joey Mohanna.

And although Joey wants to bring Trina home, she says the rescue group, 100+ Abandoned Dogs of Everglades Florida, which posted a video on Facebook, is refusing to release the dog to her. She is hoping by going public, that will change.

Joey Mohanna: “This is desperation calling. Please give her back to us. We want her. She’s our family.”

Joey is divorced, and her husband kept Trina when they split. She says she is not sure how Trina ended up on the street in such terrible condition.

After allowing a brief reunion, Joey says the rescue group told her she was not going to get Trina. This despite the fact she says she had nothing to do with the dog ending up on the street.

Joey Mohanna: “You have to know that Trina’s going to remember that Mommy came and saw her looking like this and Mommy never came back. And I can’t live with that. It’s not fair.”

Amy Roman: “So if anybody can offer this girl a loving home, I’m asking you to call me directly.”

Amy Roman is the president of 100+ Abandoned Dogs of Everglades Florida.

Amy Roman: “This is not an easy decision.”

Amy claims Joey made the decision to let Trina be adopted by someone else. Trina would get a new home and was given a new name: Angie.

Amy Roman: “She stated that if we could find Angie a wonderful, loving home, where I thought or my crew thought that she would have a wonderful life, then she’s for it.”

Not so, says Joey.

Joey Mohanna: “I have horses.”

She says she even sent this video to Amy to show her that Trina would be living in a home on three acres of land in Okeechobee with her children and another dog.

Joey Mohanna: “Just think about it, Amy. We all want our dog.”

Requests for an on camera interview with Amy got no response. We did get an unsigned e-mail from the rescue that reads: “The dog has a microchip. When the animal hospital called, the number registered had been disconnected. This dog is emaciated, near death. Animal cruelty charges are being filed. The vet bills are almost at $3,000 dollars and climbing to save her life.”

However, Joey’s number was also connected to the microchip, and that’s how she learned Trina had been rescued.

Carmel Cafiero: The last Joey heard, Trina was here at Imperial Point Animal Hospital. But that was days ago, and at this point, she is not sure where Trina is and if she will ever see her again. Carmel Cafiero, 7News.”