FORT LAUDERDALE, FLA. (WSVN) - Police arrested a woman during a protest that sent hundreds of people objecting to President-elect Donald Trump marching through the streets of Downtown Fort Lauderdale for more than three hours, Sunday.

Demonstrators pounded the pavement and chanted in unison as they took their message to the streets for a third consecutive night of anti-Trump protests in South Florida.

Witnesses told 7News that the woman who was arrested had thrown water on Trump supporters after they clashed in the street.

At one point, marchers were met with opposition from a man who said he’s relieved Democratic candidate Hillary Clinton was defeated in the polls. “Thank God that she lost, and I hope she gets arrested,” he yelled at one protester.

“Trump is not my president,” said protester Robert Steele. “He doesn’t support the people. He didn’t win the vote of the people, and he doesn’t belong in office. He’s a disgrace to America.”

Cellphone video captured the moment Fort Lauderdale Police took one female demonstrator into custody. “I want an attorney! I want to be released! I have done nothing wrong!” she screamed as three officers carried her off the ground in handcuffs.

The rowdy crowd stomped down Las Olas Boulevard as they headed toward Fort Lauderdale Beach.

Drivers were forced to wait as the group walked four miles, protesting the man they worry will dismantle the Affordable Care Act, overturn marriage equality and strictly enforce immigration laws.

“Protesting is OK as long as there is no violence,” said one driver.

But their message, delivered peacefully, for the most part, did not sit well with those who support the next commander in chief.

“They’ve got no business being here,” said Trump supporter Jack Josey. “Let them go home for four years, and vote in four years for the communist of their choice.”

These steps follow a much larger protest Friday night, when thousands flooded the streets of Downtown Miami. Protesters eventually shut down the MacArthur Causeway before marching for miles to tie up traffic on Interstate 95.

The next night, a group of about 30 people formed near Miami’s Wynwood neighborhood.

Meanwhile, in Little Havana, a caravan of Trump supporters paraded the streets, Sunday, with a different message. 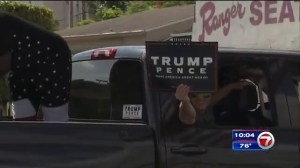 “We’re all behind him, and behind making America great again,” said Trump protester Norma Batra. “It’s not a protest; it’s a celebration.”

In Fort Lauderdale, demonstrators experienced an array of emotions as they rejected the incoming administration. “I really don’t believe in his policies, and I’m even more fearful with Mike Pence in his position,” said protester Robyn Fear. “I’m very pro-human rights.”