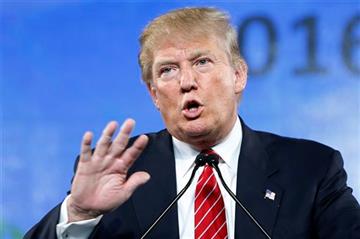 CLEVELAND (AP) — After a slow start, big money is flowing toward efforts to help Donald Trump.

Super PAC side meetings during the Republican National Convention have yielded millions of dollars in financial commitments, their leaders said, although some of the wealthiest and best-known donors remain uncomfortable with a presidential nominee whom they call divisive and light on policies.

A group called Rebuilding America Now landed a $3 million donation on Monday and made a pitch to about 25 donors Wednesday at a Ritz Carlton gathering that featured Trump campaign officials, said Laurance Gay, the group’s director. With the fresh infusion of cash, the group is set to air anti-Hillary Clinton and pro-Trump television advertisements next week during the Democratic National Convention.

Another super PAC, Great America PAC, has been working in Cleveland to woo donors, including multimillionaire investor Foster Friess and oil and gas billionaire Harold Hamm. Trump advocates Ben Carson and Dorothy Woods, a widow of one of the four Americans killed in the Benghazi, Libya, attacks, spoke to about 100 people who attended a Great America PAC meeting on Monday, said the group’s co-founder, Eric Beach.

Both groups need new money: They’re facing pro-Clinton efforts with more than $130 million. And FEC filings in recent days showed Great America PAC began the month with less than $1 million in available cash, and Rebuilding America Now with just over $500,000.

Donors have been slow to engage with pro-Trump super PACs partly because the candidate spent months criticizing such groups as “corrupt” and ridiculing those who give money to politicians as puppet masters. Others aren’t sure yet where he stands on policies they care about.

One holdout is the DeVos family, major Republican donors in Michigan who founded Amway. Betsy DeVos, in Cleveland as a delegate, said that while her family wouldn’t “preclude” helping Trump, they’re concerned they haven’t heard more from him on issues such as school choice. They’re also not happy with his tone and language.

“A lot of the things he has said are very off-putting and concerning,” DeVos said.

Another complication has been the pileup of potential groups to help Trump — with at least six super PACs in the mix. The uncertainty has left some, including oil billionaire T. Boone Pickens and gaming mogul Sheldon Adelson, holding off.

“He’s not giving to any of them right now,” said Andy Abboud, Adelson’s political adviser, who posted on Twitter a photograph of Trump with Sheldon and Miriam Adelson Wednesday night at the convention arena. Abboud said seemingly all of the groups have made a pitch to Adelson.

That includes Rebuilding America Now. Gay said he and Trump friend Tom Barrack, who helped land the group’s seed money, met with the Adelsons in early June in Los Angeles.

Rebuilding America Now’s biggest donor so far has been Los Angeles developer Geoffrey Palmer, who gave $2 million. But on Monday a $3 million donation from Home Depot co-founder Bernie Marcus arrived, according to two sources familiar with the donation who requested anonymity because they weren’t allowed to discuss it. Marcus’ spokesman could not be reached for comment.

Gay is a longtime friend of Paul Manafort, Trump’s campaign chairman, and said he and Barrack started the super PAC at Manafort’s behest. And Trump’s campaign has made it clear to donors that they like what Rebuilding America Now is doing; Manafort called into the group’s Wednesday meeting, and new vice presidential candidate Mike Pence has circulated a statement praising it.

Federal rules prohibit Trump and his campaign from coordinating the pro-Trump spending done by super PACs.

New money is enabling Rebuilding America Now to air ads next week nationally and in key states such as Ohio and Florida. One spot slams Clinton for making millions from speeches and landing huge contributions for her family’s foundation from foreign entities. That information is spliced with footage of Clinton saying, “I don’t think you can effectively restrict outsourcing” at a private meeting in 2005 in New Delhi, India.

The super PAC sees that as a reinforcement of Trump’s talk about renegotiating trade deals to be more favorable to American workers.

The group is also airing a pro-Trump ad that shows construction and factory workers as a narrator says their jobs should come back. When a focus group of undecided Ohio voters convened by Republican pollster Frank Luntz saw the spot on Sunday, they gave it high marks — until the narrator used Trump’s catch phrase, “We can make America great again,” and showed his name.

Still, that commercial could be a major asset for Trump, whose own campaign has not aired a single commercial since he locked up the nomination in early May, while Clinton has put up $35 million in mostly positive ads about herself.

Trump’s campaign coffers also are swelling from the convention and other recent events.