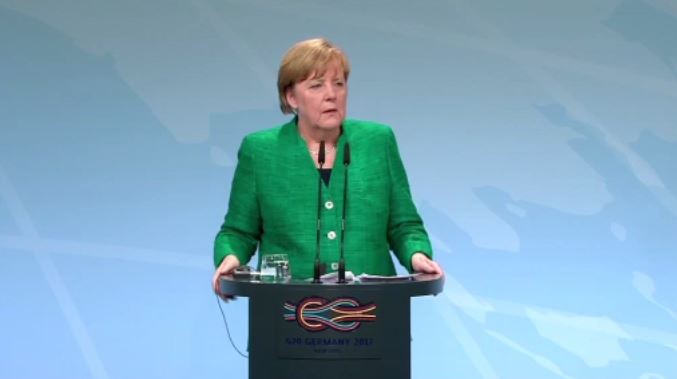 Merkel’s comments at the Munich Security Conference, an annual gathering of top global defense and foreign policy officials, followed days of tensions between Washington and Europe over Iran.

U.S. President Donald Trump unilaterally pulled out of the 2015 Iran nuclear agreement last year, leaving the others involved — Germany, Britain, France, China, Russia and the European Union — scrambling to try and keep it alive. The deal offers Iran sanctions relief for limiting its nuclear program, and the International Atomic Energy Agency has said so far that Tehran is sticking to the agreement.

But the U.S. argues that the deal just puts off when Iran might be able to build a nuclear bomb. Pence pushed at the conference for Europeans to end their involvement in the nuclear deal, calling Iran “the leading state sponsor of terrorism in the world.”

The comments came after Merkel said she shared concerns about many Iranian efforts to grow its power in the region. While she said the split with the U.S. over the nuclear agreement “depresses me very much,” she defended it as an important channel to Tehran.

“I see the ballistic missile program, I see Iran in Yemen and above all I see Iran in Syria,” she said. “The only question that stands between us on this issue is, do we help our common cause, our common aim of containing the damaging or difficult development of Iran, by withdrawing from the one remaining agreement? Or do we help it more by keeping the small anchor we have in order maybe to exert pressure in other areas?”

Merkel also questioned whether it’s good for the U.S. to withdraw troops quickly from Syria “or is that not also strengthening the possibilities for Iran and Russia to exert influence there?”

Turning to nuclear disarmament, Merkel said the U.S. announcement earlier this month that it was pulling out of the 1987 Intermediate-Range Nuclear Forces treaty was “inevitable” because of Russian violations.

Moscow followed suit by also withdrawing from the treaty, strongly denying any breaches. The U.S. administration also has worried that the pact was an obstacle to efforts to counter intermediate-range missiles deployed by China, which is not covered by the treaty.

Merkel noted the treaty was conceived “essentially for Europe,” where such missiles were stationed during the Cold War. She said “the answer cannot lie in blind rearmament.”

“Disarmament is something that concerns us all, and we would of course be glad if such negotiations were conducted not just between the United States … and Russia, but also with China,” she said.

Merkel also defended Germany’s progress in fulfilling NATO guidelines for countries to move toward spending 2 percent of gross domestic product on defense by 2024, which have been criticized as too slow. And overall, she rejected the idea of go-it-alone foreign policy.

She said it is better to “put yourself in the other’s shoes … and see whether we can get win-win solutions together.”

Pence stuck to the U.S. line that the 2 percent NATO guideline is a strict commitment rather than a target, saying while more alliance members have met the criteria, “the truth is, many of our NATO allies still need to do more.”

“The United States commends all our European partners who’ve taken a strong stand against Nord Stream 2,” he said. “And we commend others to do that same.”

Merkel defended the pipeline under the Baltic Sea, dismissing the American concerns as unfounded and assuring Ukraine that it won’t get cut off from Russian fuel.

Speaking as Ukrainian President Petro Poroshenko looked on, she told him his country would continue to be a transit country for Russian gas even after the pipeline is complete.

Merkel noted that Europe also has enough terminals to receive more liquefied gas from the U.S., among other options.

“There’s nothing that speaks against getting gas from the United States, but to exclude Russia is the wrong strategic signal.”

“This was a big and say-it-as-it-is Merkel speech,” Daniela Schwarzer, the director of the German Council on Foreign relations think tank, wrote on Twitter. “Minutes of applause and standing ovations for a powerful commitment to picking up the pieces of a shattered (world) order and working on a European and (international) order that creates win-win situations.”