Biden vows US to act decisively if Russia invades Ukraine 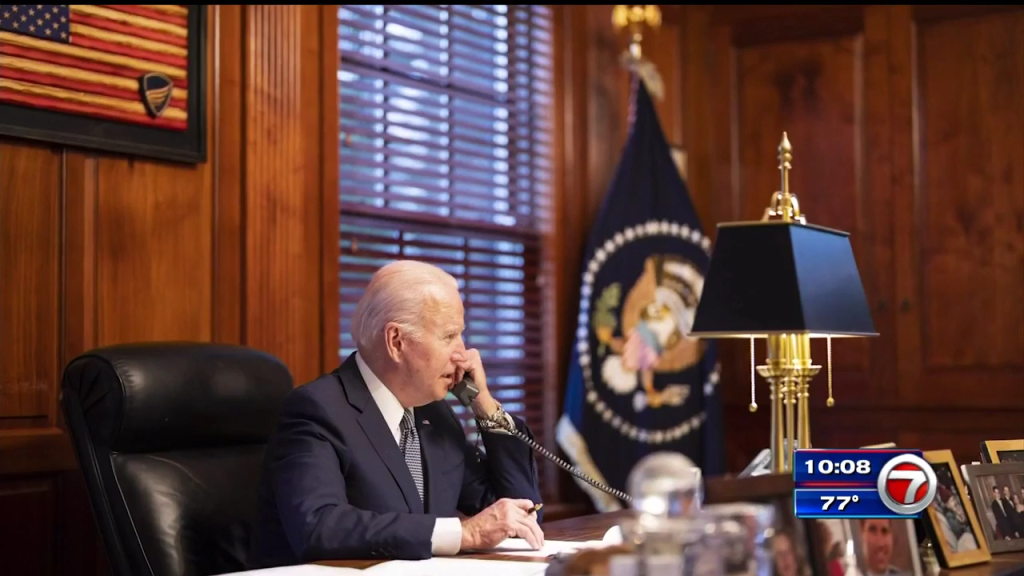 WILMINGTON, Del. (AP) — President Joe Biden conferred on Sunday with Ukraine’s leader over the Russian troop buildup near its border, promising that the U.S. and allies will act “decisively” if Russia further invades the Eastern European nation.

Biden and President Volodymyr Zelenskyy’s call came as the U.S. and Western allies prepared for a series of diplomatic meetings to try to de-escalate a crisis that Moscow said could rupture ties with Washington.

“President Biden made clear that the United States and its allies and partners will respond decisively if Russia further invades Ukraine,” White House press secretary Jen Psaki said in a statement following the call.

Psaki added that Biden underscored his commitment to the principle of “nothing about you without you,” the tenet that it won’t negotiate policy that impacts Europe without its allies’ input.

Biden has spoken of hitting Russia with economy-jarring sanctions if it moves on Ukraine’s territory, but he said last month that U.S. military action is not on the table.

The Kremlin has demanded that any further expansion of NATO exclude Ukraine and other former Soviet countries. The Russians have also demanded that the military alliance remove offensive weaponry from countries in the region.

The White House has dismissed Russia’s demands on NATO as a non-starter. A key principle of the NATO alliance is that membership is open to any qualifying country. And no outsider has membership veto power. While there’s little prospect that Ukraine would be invited into the alliance anytime soon, the U.S. and its allies won’t rule it out.

The United States has made little progress in efforts to persuade Russian President Vladimir Putin to ease tensions. Senior U.S. and Russian officials are scheduled to meet Jan. 9-10 in Geneva to discuss the situation. Those talks are to be followed by meetings at the NATO-Russia Council, and at the Organization for Security and Cooperation in Europe.

Biden spoke with Putin for nearly an hour on Thursday. He told reporters the next day that he warned Putin that his economy would pay a “heavy price” if Russia, which has massed some 100,000 troops near the border, made further moves against Ukraine.

“I’m not going to negotiate here in public, but we made it clear that he cannot — I emphasize cannot — move on Ukraine,” Biden said Friday.

Biden said he told Putin it was important for the Russians to take steps before those meetings toward easing the crisis. Putin’s foreign affairs adviser, in describing the presidents’ conversation this past week, said Biden’s pursuit of sanctions “could lead to a complete rupture of relations between our countries and Russia-West relations will be severely damaged.”

U.S. intelligence findings indicate Russia has made preparations for a potential invasion in early 2022. But White House officials say it remains unclear whether Putin has already made a decision to move forward with military action.

“I always expect if you negotiate you make progress, but we’ll see,” he said Friday. ”We’ll see.”

Past military incursions by Putin loom large as Biden weighs his next steps.

In 2014, Russian troops marched into the Black Sea peninsula of Crimea and seized the territory from Ukraine. Russia’s annexation of Crimea was one of the darker moments for President Barack Obama on the international stage.

The U.S.-Russia relationship was badly damaged near the end of President George W. Bush’s administration after Russia’s 2008 invasion of its neighbor Georgia after Georgian President Mikheil Saakashvili ordered his troops into the breakaway region of South Ossetia.

Rep. Adam Schiff, D-Calif., chairman of the House Intelligence Committee, said Sunday he feared that Putin was intent on invading Ukraine and “nothing other than a level of sanctions that Russia has never seen will deter him.”

“Russia needs to understand we are united in this,” Schiff told “Face the Nation” on CBS. ”I also think that a powerful deterrent is the understanding that if they do invade, it is going to bring (NATO) closer to Russia, not push it farther away.”