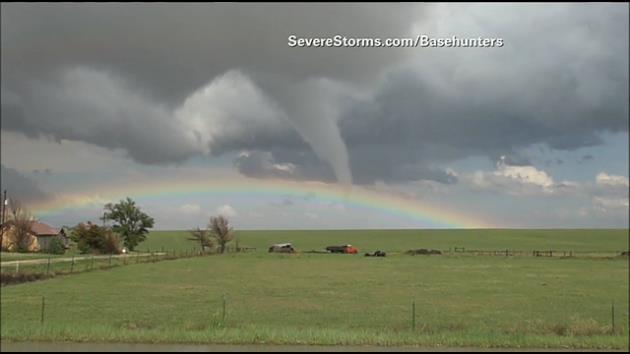 VAN, Texas (AP) — About two dozen people were injured and some homes destroyed after a severe storm struck the small town of Van in northeast Texas, an emergency management official said.

The storm that the National Weather Service said likely produced a tornado hit the east side of Van Zandt County and the city of Van around 8:45 p.m. Sunday.

Chuck Allen, the Van Zandt County fire marshal and emergency management coordinator, said in an email early Monday that approximately 26 patients were transported to hospitals after a triage area was established at a church.

The extent of their injuries was not immediately clear. About 30 percent of the city suffered some kind of damage, he said.

Allen said authorities were going door to door in the city about 70 miles southeast of Dallas, performing a second search for additional injured individuals.

Utility companies are working to restore “vital infrastructures,” and road and bridge crews are working to open streets and highways to allow for first responder access, he said.

The Van Independent School District said on its website schools would be closed Monday.

The storm was part of severe weather that stretched across North Texas on Sunday.

Earlier in the day, another likely tornado ripped roofs off buildings and damaged trees near Denton, about 40 miles northwest of Dallas, according to National Weather Service meteorologist Tom Bradshaw. There were no immediate reports of injuries or fatalities.

The area also experienced torrential rains that led to widespread flash flooding. Authorities in Denton County said Sunday that two groups of people had to be airlifted by helicopters to safety.

Howard County Sheriff Brian McJunkins says the victims lived in adjoining mobile homes. He says two other people were critically injured. The TV station says there were reports of tornado sightings in the area Sunday as well as reports of heavy damage to homes and power outages.

Tornadoes were also reported in central Iowa, where a roof was ripped off a high school, and in eastern South Dakota, where a twister damaged the small town of Delmont and injured at least nine people.

“Our house is flat. There is nothing left,” said Stephanie Lunder, 34, of Delmont. She was with her husband and four children in the basement when the storm hit.

The town about 90 miles southwest of Sioux Falls had no water, power or phones, South Dakota Department of Public Safety spokeswoman Kristi Turman said. The 200-plus residents were asked to leave for safety reasons.