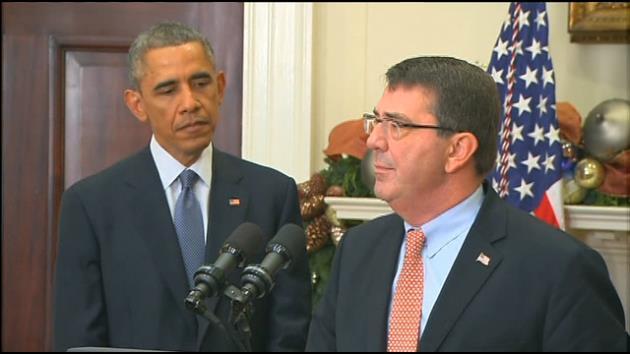 Vice President Joe Biden issued the oath of office from the White House, on a Bible held by Carter’s wife, while most of the federal government was closed because of snow. Biden said Carter faces “many tough missions,” ranging from battling Islamic State militants and strengthening the NATO alliance, to technological advancements and budget cuts.

“This is the guy that fits the job,” Biden said, calling Carter a “profoundly capable manager.”

Obama’s newest Cabinet member responded that he was taking office with three commitments. Carter pledged to help Obama make the best possible decisions about U.S. and global security; to protect the dignity, safety and well-being of service members, and to build a force for the future that embraces change.

With lawmakers debating Pentagon funding levels, Carter said he was committed to “not only securing the resources we need but to make sure we make the best use of the taxpayer’s dollar.”

Carter, 60, replaces Chuck Hagel, who resigned under pressure after a rocky relationship with the White House. The swearing-in ceremony was held in the Roosevelt Room with Carter’s son, William, and a handful of senior military leaders looking on, including Deputy Secretary of Defense Bob Work and Gen. Martin Dempsey, chairman of the Joint Chiefs of Staff. Carter declined to answer a question about providing arms to Ukraine as he left the room.

Biden teased Carter, who previously held other positions in Pentagon leadership, for a habit of holding meetings while “walking briskly down the hallways of the Pentagon, with his aides struggling to scribble and jog simultaneously.”

“Ash Carter’s a thinker and a doer,” Biden said. The vice president said that Carter “saved thousands of lives and limbs” by getting protective undergarments and mine-resistant vehicles for troops in Iraq and Afghanistan.

Carter had earlier reported to work at the snowy, icy Potomac River entrance to the Pentagon. His wife, Stephanie, slipped and fell on the icy pavement before the gathered media, but laughed it off and later told journalists at the White House she was fine. Biden kept his hands on her shoulders as her husband addressed reporters at the swearing-in, at one point leaning down close to her ear.

In an e-mail to all Department of Defense personnel, Secretary Carter wrote that the challenging times “demand leadership and focus.” He repeated the three commitments he made from the White House.

“I pledge to make decisions about sending you into harm’s way with the greatest reflection and utmost care — because this is my highest responsibility as secretary of defense,” he wrote.