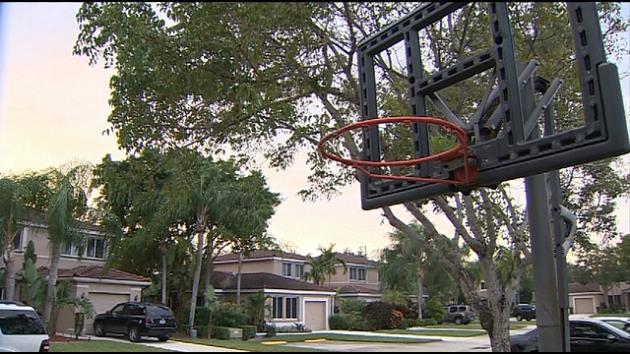 WSVN — A group of young kids out playing basketball in front of their homes where their parents can see. A great idea right? Not if you live in one Broward community which told the kids to take down the goal. Which is why one youngster called Help Me Howard with Patrick Fraser.

In a lot of ways, Anthony Petrillo Jr. is just like every other 13-year-old and in one way, he is very different.

Anthony Petrillo Jr.: “Instead of sitting inside and playing video games, playing on my phone, I can go outside, I can fish, I can play basketball.”

Anthony loves to play basketball with his neighbors, which is exactly why his father put up the portable basketball goal in the common area so the kids who live around the cul de sac would have a place to shoot hoops.

Anthony Petrillo: “So I figured that spot over there looks absolutely perfect and the kids can play over there with no interruptions, not worrying about breaking a window or anything.”

For the past nine years, the basketball goal has been right here in Harmony Lakes.

Notice Anthony Sr. paused for a second because…

Anthony Petrillo: “I got a letter in the mail saying I need to move my basketball hoop.”

The letter from the Harmony Lakes Townhomes Association said take the goal down. Surprising both Anthony’s.

Anthony says the board apparently reacted after one resident near him complained.

Anthony Petrillo Jr.: “They said when they back out of the driveway and come out their driveway, they are worried they are going to hit it.”

So Anthony Jr. did what a bright young man does in a democratic country. He went to 19 doors in the circle, with a petition, asking if the residents minded if he kept the goal there to play basketball.

Anthony Petrillo Jr.: “I went to every house with my dad and no houses said, ‘No.’ They even encouraged the fact that I should be outside.”

19 residents were shown the petition, 19 signed it. Anthony didn’t bother to ask the 20 resident, the one who complained about the goal.

Anthony Sr. sent the petition to the board. He says they didn’t respond to that but they did start fining him.

There is a basketball court at Harmony Lakes but there is no goal, so the kids can’t play there and now if the board has its way, they won’t play here either.

Anthony Petrillo: “He is being fined for playing basketball in his neighborhood, right out front of his own home.”

Well Howard, legally can the association’s board do this to young Anthony and his friends?

I spoke to several people. First of all the $200 fine against Anthony was wiped out. Next I was told the Harmony Lakes basketball court is getting a backboard and a goal so the kids in Anthony neighborhood can play there. And after reviewing the associations documents, Howard couldn’t find anything blocking Anthony from putting his goal in his yard. So he moved it from the common area to his driveway but the two Anthony’s don’t want to give up.

Howard Finkelstein: “There is a simple solution. If you don’t like the decision from the board, get on the board. Then you control what’s done in your association.”

Anthony hopes the board lets them put the goal back where everyone can play basketball and not just when Anthony is home.

Anthony Petrillo: “We’re hoping these people will stop complaining about it because there is no reason you have to take a basketball hoop away from a bunch of kids trying to have fun.”

Patrick Fraser: “If the parents own their homes and therefore they own the common area, why can’t their kids play in the common area? The answer? Because the board says so. Like Howard says, if you don’t like it, replace the board.”

A problem blocking you from Harmony? Feel like your just dribbling in circles? Pass it to us. It’s no slam dunk we can solve it, but we will try to score for you.

E-mail: helpmeHoward@wsvn.com (please include your contact phone number when e-mailing)