There are now voluntary smoke-free zones on Miami Beach 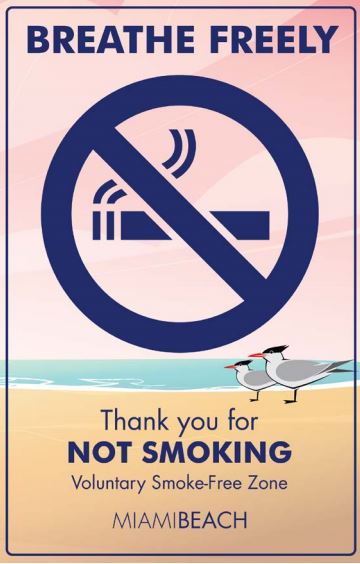 Flyer courtesy of the City of Miami Beach

MIAMI BEACH, FLA. (WSVN) - You may be running into “Thank You for Not Smoking” signs very soon on Miami Beach.

The City of Miami Beach has created two voluntary smoke-free zones on the beach at the southern end of Lummus Park, at Fifth Street, as well as on 86th Street. Signs there actually encourage residents and tourists to refrain from smoking.

The signs will be clearly visible at both locations to outline the smoke-free areas.

Miami Beach Director of Environment & Sustainability Elizabeth Wheaton explained, “This pilot program was brought about to initiate efforts to reduce second-hand smoke, which can pose a health risk to everyone, and also as an anti-litter measure as discarded components of cigarettes that are toxic to wildlife, waterways and beaches.”

According to the City of Miami Beach, cigarette butts are one of the largest pollutants found on the sand, and since they are not biodegradable, they can be deadly to birds and other marine organisms.

“Despite the common misconception, cigarette filters can take between five to 10 years to completely biodegrade, as they are made of cellulose acetate, a fibrous plastic,” stated the city in a press release.

Birds and other marine organisms confuse the cigarette butts as being edible, making them extremely hazardous.

“Cigarette filters are the single most collected item during beach cleanups each year,” added Wheaton. “They are an environmental blight on streets, sidewalks and other open areas.”

According to the City of Miami Beach, other cities, including New York City and Los Angeles, have banned smoking in public areas and parks due to the harm it causes to wildlife.