MIAMI (WSVN) - Police are searching for the person who beat a small dog and left her to die in a parking garage, where she was found lying motionless, earlier this month.

Surveillance video from Friday, April 7, shows a red Toyota Yaris pulling into the Publix parking garage off West Avenue. A man then gets out and appears to be taking something out of his car, police said, before setting it on the ground.

Detectives believe he was handling the 4 or 5-year-old Yorkshire terrier, who police named Lily. 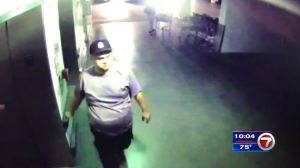 “Someone basically had to have beaten and strangled her and then literally just took her body and left it there,” said Dr. Joy Carter, the treating veterinarian.

Carter said Lily had several broken ribs and signs of strangulation. She died two days after being found.

A Publix employee found the six-pound dog in a garage next to the supermarket, and a Miami Beach Police officer then helped bring the dog to Doral Centre Animal Hospital.

Further video showed the man walking to an elevator with his face clearly visible. Police said, before he drove off, after going to the restroom, he may have stomped on Lily.

The Publix employee found her lying on her side, breathing and crying in pain.

“The dog came in with pretty severe injuries to the left side of the chest. It had like seven fractured ribs. It had indications that it had been strangled with some type of leash or collar or rope,” Carter said, “and then had pretty severe head trauma; the dog was actually pretty much comatose or unconscious when it came in.”

There was no evidence that a car might have hit Lily.

MBPD detectives are looking to identify and speak with the man shown in the surveillance video.

“What we’re trying to do is get his picture out there for the public, ’cause someone’s gotta recognize this guy,” Carter added.

If you have any information on this case if animal cruelty, call Miami-Dade Crime Stoppers at 305-471-TIPS. Remember, you can always remain anonymous, and you may be eligible for a $1,000 reward.