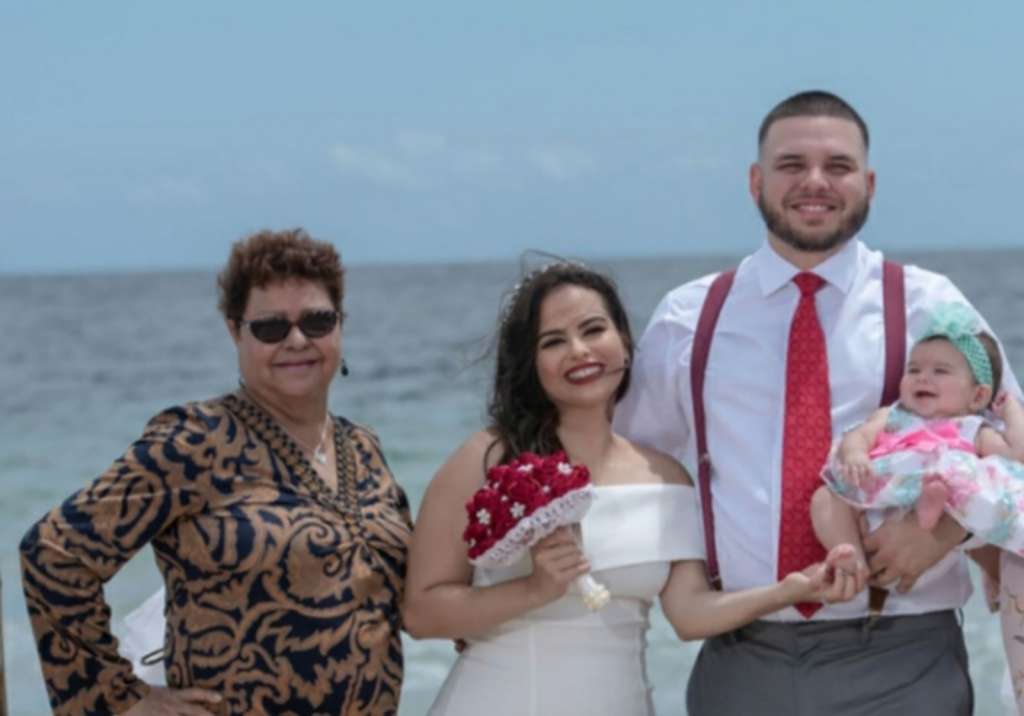 (CNN) — Hortencia Laurens was nearing her 70th birthday when she was diagnosed with coronavirus on July 2. Her grandson, Diego Fereira, told CNN that her she spent her final days navigating the Florida healthcare system with a rapidly progressing illness.

“My grandmother was alone, she was scared,” Fereira said.

More than 3.3 million people have been diagnosed with Covid-19 in the US since the pandemic began, according to data from Johns Hopkins University. And Florida has been hit particularly hard.

The state has reported more coronavirus cases than most countries in the world, leaving hospitals around Florida overwhelmed.

Just days after her diagnosis, she would die of the virus — wrapped in her daughter’s arms — on her way back to the hospital.

Her family was set to go on their annual trip on July 6 to the west coast of Florida, but a week before the reunion Laurens started to feel unwell, Fereira said.

The illness began with stomach symptoms, but Laurens’ daughters soon noticed she was very weak and not making sense, Fereira said.

Late Wednesday, July 1, her daughter brought her to the Memorial Hospital in Pembroke Pines, Florida, Fereira said. Due to virus precautions, his aunt could not stay at the hospital with Laurens, who had underlying conditions including diabetes and did not speak English.

In the early hours of Thursday morning, the hospital called the family to tell them Laurens had been diagnosed with coronavirus, Fereira said. On that hospital phone call, Laurens cried to her family that she was scared.

According to a medical document provided by Fereira, she was released around 3 a.m. on Thursday with instructions to pick up prescriptions and to call her doctor for a follow-up consultation in two days. But her family had no way to make contact with her directly, because she did not have a cellphone with her, and it was 6 a.m. before the hospital let them know she could be picked up, he said.

The hospital system said it couldn’t comment on Laurens’ specific case but that admission decisions are based on a number of factors and the physician’s assessment.

That Thursday night, still feeling unwell, she was taken by her daughter to another Memorial Hospital Miramar location, Fereira said. She was again diagnosed with Covid-19 and prescribed new medications for her symptoms, according to documents provided by Fereira.

Although documents from the hospital instructed her to schedule a follow-up visit around July 4, Fereira said medical offices were closed for the holiday and she got an appointment for early that week.

But Laurens didn’t make it to that day, Fereira said.

Laurens’ daughters cared for her over the weekend. She had a bad day Saturday, with fever, chills and body aches, but seemed to improve Sunday, Fereira said. Then Sunday night into Monday morning she developed pains in her chest, had a hard time breathing and was sweating profusely, Fereira’s mother and aunt told him.

Fereira says he woke up Monday morning to a 2 a.m. text from his father saying Laurens was being taken to the hospital in an ambulance with her daughters.

In his aunt’s arms, Fereira’s grandmother flatlined in the ambulance, he said. An EMT looked on, frozen, and his aunt told Fereira that she had to shake him out of it.

“It just goes to show, everybody is afraid,” he said.

Medical personnel attempted to revive her at the hospital, but she did not make it, Fereira said.

Fereira lives close to the Pembroke hospital his grandmother was rushed to in her last moments, and he said he relives her death every day.

“I hear ambulances going to that hospital once every one to two hours,” he said. “The thought of it, that my mom had to see my poor grandmother in an ambulance strapped up to life saving devices … it’s so fresh.”

And the same days he hears ambulances bringing more patients to the hospital in the state with surging cases, Fereira said he is frustrated to see people going about without masks as if nothing were different.

A caretaker and matriarch looking for better healthcare

On Wednesday, family gathered in a small group for her funeral. Most had to join online because many of those who called Laurens a mother, grandmother, great grandmother, sister, aunt and friend live in Colombia or Venezuela.

Wherever they are, they are all mourning a matriarch, Fereira said. She always had the best advice and had a natural or emotional remedy for anyone feeling down or unwell, he said.

All the money she made as a personal home caretaker for the elderly, Fereira said, she sent back to her sons and daughters dealing with the pandemic in Colombia and Venezuela, where she immigrated from in the early 2000’s hoping for a more comfortable life and better health care, Fereira said.

‘The worse it gets, the worse it’s going to get in hospitals’

“I’m so thankful for those people but at the same time I feel like all medical services are so overwhelmed right now. Our medical professionals need some kind of back up,” he said.

Memorial Healthcare System, which includes the Pembroke and Miramar locations where Laurens was treated, said in a statement that the hospital system cannot comment on patient care due to HIPAA regulations.

“As a public healthcare system, Memorial does not, nor have we ever, allowed bed availability to determine care decisions, a policy we expect to continue despite the surge of COVID-19 cases. Admission to a hospital is a physician-driven decision based on many factors, including a patient’s vitals and clinical presentation at the emergency room,” the hospital system said. “Throughout the state, about 20% of patients who are COVID-19 positive visit emergency rooms. Ultimately, statewide data shows that about 11% of people with COVID-19 get admitted to hospitals.”

Fereira hopes the story will encourage people to take more measures to reduce the spread of the virus and support medical staff as restrictions lift and cases increase.

“The worse it gets, the worse it’s going to get in hospitals — and things like this are going to keep happening,” he said.