SUNRISE, FLA. (WSVN) - A veteran Broward Sheriff’s Office sergeant who was facing child pornography and molestation charges has died in the hospital after suffering a self-inflicted gunshot wound, officials said.

According to a BSO spokesperson, Sgt. Kreg Costa died at Broward Health Medical Center, Wednesday night, around 11:27 p.m. The 43-year-old was rushed to the hospital Wednesday evening, after an apparent suicide attempt.

Costa spent almost a week in jail on 29 charges of child pornography and child molestation. He bonded out of jail Wednesday, and that’s when, police said, he went home and shot himself. Police said Kosta called 911 briefly just before committing suicide. “Come to the side of the house,” Costa told the dispatcher before hanging up. When the dispatcher called back, there was no answer.

“She left to get some food, check on her children,” said Israel. “They were staying in another place.”

Sunrise officials were dispatched to Costa’s home along the 9100 block of Sunset Strip in Sunrise.

Neighbors were shocked to hear the news. “I don’t know,” said Linda Martin who lives nearby.

Costa was released on bond Wednesday after he was arrested last week after evidence from a BSO investigation surfaced. During his court appearance on Friday, the judge stipulated that Costa could not access any weapons, along with internet devices. The judge also ordered him to stay away from minors, including his own children, without supervision. It remains unknown how he got access to the weapon.

“I used to see him when I leave. He’s out with his children,” said neighbor Tracy Robbins. “He was a family man, not knowing those allegations were against him.”

The married father of five is said to have shot himself outside of his home, Wednesday evening.

Neighbors said they saw paramedics drag Costa’s limp body away from the home after 5 p.m. “It’s really sad. He could have gone and talked to somebody somewhere, instead of doing something like that in his home,” Ramrattan said. “Can you imagine what his wife and kids are gonna go through now?”

Investigators are labeling this incident as a suicide attempt. They said he left two notes on the scene.

Sunrise Police Department provided an image of the suicide note: 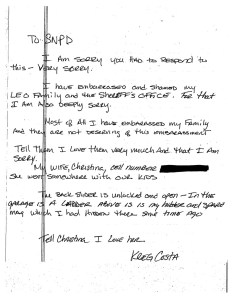 “Our job is to police not only the community but our own,” said Israel. “Not everyone you work with is ethical and some people slip through the cracks. One person is responsible for this, and that’s Greg Costa.”