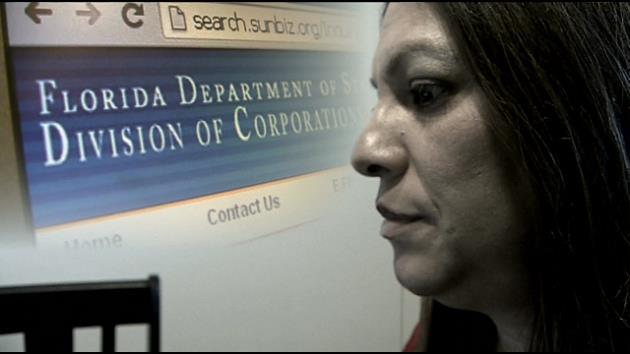 She Googled her name and discovered it had been used to help form a corporation, and her signature was forged on the documents. Who did it? Why? And what can you do if it happens to you? Let’s bring in Help Me Howard with Patrick Fraser.

Anna French is a busy woman.

Anna French: “I work as an office manager during the day and on my free time on the weekend I create dishes.”

Anna created so many dishes, she decided to share them by writing a cookbook called “A Pinch, a Dash and a Pocketful of Cash.”

Anna French: “For budget-cautious cooks, really simple recipes to do, so on my spare time that is what I do.”

The book is out now, and to see how well it’s selling and what people think of it, Anna headed to her computer.

Anna French: “I Google my name, and lo and behold, I was linked to a corporation that I never knew I had.”

The corporation was Florida’s Water and Fire Restoration.

Anna French: “I was shocked, had no clue I had a corporation under my name back in 2010, four years ago.”

Anna is the registered agent, the person to be notified if the company is sued.

The corporate address was her home address in 2010, and the owner was Anna’s ex boyfriend, who opened the corporation while they were dating.

Anna French: “We were living under the same roof. Matter of fact, the address that is on the corporation is where I used to reside.”

We contacted Anna’s ex, Ernie Fernandez. He told us he owned the company, but didn’t know who listed Anna as the registered agent or who forged her signature on the corporate documents. Anna was stunned.

Anna French: “I don’t know if there are any lawsuits with this company that are in my name! Yeah, it’s scary.”

Ernie didn’t remember who did the paperwork to create the corporation, but according to the documents, it was a woman listed as Heidi Laub. We contacted her.

She says she didn’t file the paperwork that lists Anna as the registered agent. And this signature is not hers; it’s forged as well.

We called Ernie Fernandez again. He referred us to his attorney, who sent a statement from him saying, “This is solely an attempt from an estranged ex-girlfriend to publicize her recent cookbook while hurting my reputation.” He added, “I can assure you that Ms. French’s name was not unlawfully used by me to incorporate any business.”

But Anna wants her name off the business and asked the State Division of Corporations to remove it.

Anna French: “And they told me I had to pay $35, which I laughed about, because why should I have to pay $35 to remove my name of a corporation that I didn’t put my name on there to begin with?”

The corporation is now listed as inactive, but Anna’s name is there and she is not happy.

Anna French: “My address, my forged signature, which is not my signature, all my personal information.”

Well Howard, someone forges your signature, creates a corporation and lists you as the registered agent with your home address. What can you do?

Howard Finkelstein: “Good news and bad news. First of all, you don’t have to pay $35 to protect yourself. The bad news? If you remove your name, it’s still in the file. What you can do is put a document in the file for free, explaining you have nothing to do with the company and, of course, call the police because forging a signature is a felony, and someone could go to prison for that.”

We contacted the States Division of Corporations. They told us they don’t have the legal authority to remove names from documents because they are just the keeper of record. But they did allow Anna to file an amendment that her name and forged signature were used to open this business, that she has no knowledge of this company and that she had notified the police of the alleged fraud. That was filed for free and is now public record.

Howard Finkelstein: “Anna did everything right, and because of that has nothing to worry about. The public record now shows she had nothing to do with the company, and if it reopens and they get sued, she is protected from a lawsuit.”

With this out of the way, Anna can focus on writing her second cookbook, and hopes someone in Tallahassee does some rewriting.

Now, Howard mentioned forging a signature filed with the state is a felony, but law enforcement probably won’t consider this a high priority. First of all, it could be difficult to prove who forged the signature, and it’s a low priority because no money was taken and no one suffered any economic damages.

Bad problems incorporated together giving you the business? Ready to dissolve them and move on? File it with us. We will forge ahead for you and cook up a nice, tasty solution.