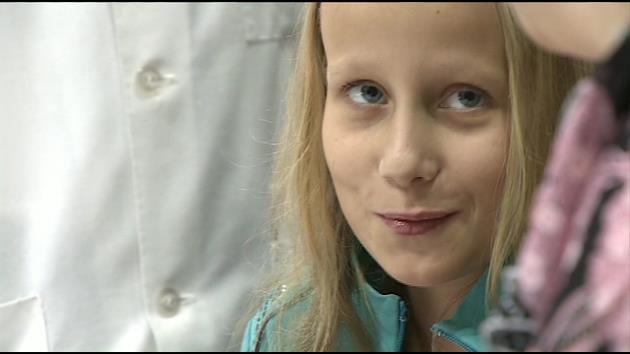 It was balloons, cake and smiles for 12-year-old Daria Rozhkova. The 12-year old and her mom made the long journey from Russia to Miami for life-saving surgery.

Dr. Andrea Maggioni: “How are you feeling?”

Daria suffers from a rare disease called Lynch syndrome, which caused a large tumor to grow in her intestines.

Dr. Andrea Maggioni: “It’s a very aggressive form of cancer that affects several organs and has failed to respond to the traditional chemotherapy.”

With very little chance of survival, the family took a leap of faith, traveling to Miami Children’s Hospital in the hopes of saving Daria’s life.

But by the time they arrived at the hospital, doctors were not even sure they could treat her.

Dr. Cathy Burnweit: “It clearly would be a very difficult case, not only for the medical team, but certainly for Daria.”

So they pulled together a team of specialists for what was going to be a very long and tedious night.

Dr. Cathy Burnweit: “We were in the operating room 19 hours.”

Surgeons were surprised to see how much the cancer had spread.

Dr. Cathy Burnweit: “On her diaphragm, in her liver, in her spleen, and five or seven different actual discreet lumps across the intestine.”

Dr. Miguel Castellan, a pediatric urologist, had to reconstruct both her kidneys, which were blocked by the tumor.

Dr. Miguel Castellan: “Kind of complicated, but it was a very good success.”

Once all the cancer was removed, they used an innovative treatment called hot chemotherapy.

Dr. Cathy Burnweit: “This technique delivers the chemotherapy to where the cells are without invading the rest of the body.”

So Daria will not lose her hair or suffer any side effects. Meanwhile, her anxious mom put her faith in the medical team.

Natalia Rozhkova (translation of): “Giving the life of a child to a doctor’s, and to have that feeling that everything is going to be fine.”

Dr. Cathy Burnweit: “While we surely think that we have given her many extra years of life, there’s a small percent chance that we would actually cure her.”

Now, one month after surgery, Daria is doing great. She made the best of her time in Florida, visiting Metro Zoo and Medieval Times in Orlando. But Daria says she already knows the first thing she’ll do when she returns home.

Daria will have to be closely monitored by her doctors in Russia, but the good news is, she is going home cancer free. In the plex, Lynn Martinez, 7News.