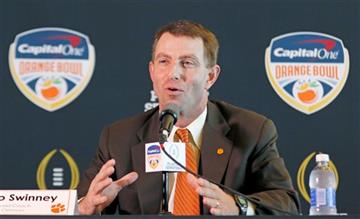 FORT LAUDERDALE, Fla. (AP) – Clemson sent three players home from the Orange Bowl for breaking team rules, including speedy receiver Deon Cain, dealing a blow to the Tigers as they prepared to face Oklahoma in a national semifinal game Thursday.

Swinney did not say what rules the players violated.

"When you don’t do the right things, there’s consequences," he said. "It’s just really that simple. It’s not a very complicated matter at all. We’ve got 115 guys, and 112 of them did what’s right and three of them didn’t. So they forfeit the opportunity and the privilege to be a part of the game."

Swinney downplayed the losses, pointing out that all three players are backups. But Cain, a 6-foot-2, 200-pound freshman, was one of the leading deep threats for the Tigers, ranking third on the team with 34 catches and second with 582 yards receiving. He had five touchdowns and averaged 17.1 yards per reception.

Cain played behind Charon Peace, who will have to take more snaps now that his top backup is out. Redshirt freshman Trevion Thompson (10 catches, 115 yards) will move up to take Cain’s spot on the depth chart. His most notable play was a crucial third-down catch in the fourth quarter of the regular-season finale against South Carolina.

"He’s very capable of making any play that we need," Swinney said. "Got all the confidence in the world in him."

Lakip handled some extra points for the Tigers, going 7-for-7, and also connected on his only field-goal attempt. Greg Hegel is the Tigers’ starting kicker but struggled on PATS, missing five attempts.

McCullough played sparingly and did not have a catch this season.

"It helps that we’ve got a big roster and we have a lot of good players," Swinney said.

The coach also scoffed at the notion that losing three players will be a distraction to the Tigers (13-0), the top-ranked team coming into the College Football Playoff.

If the Tigers beat Oklahoma (11-1), they would advance to face either Alabama or Michigan State in the national championship game on Jan. 11. None of the three suspended players would be allowed to play in that game either, according to Swinney.

"Those guys have all forfeited their opportunity to be with us for any postseason play," the coach said.

In fact, Cain is the only one who has a chance of rejoining the Tigers next season. Lakip is a senior and already graduated, so his college career is over. McCullough is a fourth-year junior and could graduate this summer, giving him a chance to transfer to another school for his final year of eligibility.

"He won’t be back with us at Clemson," Swinney said.

As for Cain, he could get a second chance but only if he takes a different approach.

"Deon will have the opportunity to come back to school and rejoin the team at some point if he grows up and does what he needs to do," Swinney said. "If he doesn’t, then he won’t. So it’s really pretty simple."