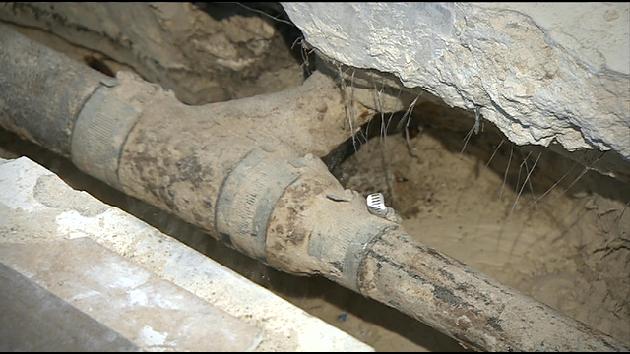 WSVN — The only thing uglier than what lies beneath the foundation of these homes may be the fight between homeowners and their insurance companies.

This group says they’ve been left with little choice but to sue for denied claims.

Richard Rodriguez: “I’m paying for a house that I can’t even utilize.”

Families who live in Southwest Miami-Dade gathered outside one family’s home to voice their collective concerns.

At issue: Corroding cast iron pipes. Cast iron was common in homes built in the 1960s and 70s. The lines carry waste water away from homes into the sewer system. And they haven’t aged well. At times backing up or breaking leaking raw sewage.

Stephen Knecht: “We’ve had kids that were taking baths, showers in the bathtub and all of a sudden, raw sewage fills up the tub with roaches running all over.”

The Rodriguez family says their home has literally made them sick. Richard Rodriguez is a City of Miami firefighter who says he filed a claim with Citizens Insurance after sewage backed up into his home. Because of the problem, they haven’t been able to live there for eight months.

Richard Rodriguez: “I’m expecting coverage. And my family has just been put through the ringer in this whole fiasco.”

And the Rodriguez family isn’t the only one facing this issue. One attorney says he’s filed approximately 100 lawsuits against state-run insurer Citizens and other insurance companies.

Stephen Knecht: “One of the biggest reasons we are here today is to try and see if we can get help, across the board from the insurance industry, from the state of Florida from the politicians.”

The fixes can be costly and can include cutting into the foundation to remove broken pipes. There are cheaper alternatives where lines are re-routed outside. But some argue a quick fix will set up homeowners for future headaches.

Stephen Knecht: “You’re supposed to get rid of all the cancer, which is what this is or it comes back. But what you’re not told, is if it comes back and you have another occurrence, you’re not covered, because of a pre-existing condition.”

So until there is a resolution, thousands of South Floridians who live in older homes could be seeing these pipe problems with no one to help pay to fix them.

Michael Peltier, a Citizens spokesman, sent 7News a statement saying: “Like other insurers, Citizens covers water loss that occurs after a sudden accident but does not insure losses due to long term degradation of pipes and plumbing. We are aware of the issue of aging iron plumbing and continue to pay claims that are covered under the terms of our policies.”