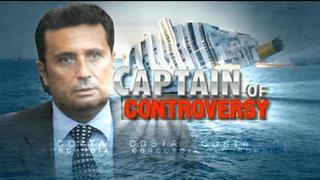 WSVN — The trial of Francesco Schettino is such a big event in Italy that a theater has been converted into a courtroom.

Schettino has been accused of manslaughter in the deaths of 32 people who died the night the Concordia capsized.

The trial began with details of the January 2012 tragedy.

Names of the dead were read and how they died– many from drowning– as the ship fell on its side.

By phone, Schettino told 7News he is not responsible and hopes to clear his name.

Francesco Schettino: “Expected to be in a position to explain exactly the reason why that accident happened.”

Schettino is also facing charges of causing the shipwreck and abandoning his ship.

It could add up to 20 years behind bars for the 52-year-old sea captain.

On the first trial day, Schettino’s attorney asked for a plea bargain: three years and five months in prison in exchange for a guilty plea.

The request was turned down once before and prosecutors are against any deal. A decision is expected in a few days.

But five others accused in the case, have asked for plea deals of two years behind bars, and those could be approved this weekend.

So Schettino is the lone defendant.

Francesco Schettino: “I don’t feel like a scapegoat. I just feel that we have to give the possibility to understand exactly, which was the problem and what was going on that night.”

But even lawyers for survivors question why only Schettino is being tried.

Fabio Targa, lawyer for Italian survivors, speaking through translation: “We were surprised and perplexed by the attitude of the prosecutors office. We expected a more rigorous attitude also towards the others who have been separated from the main trial.”

The trial is expected to be a long one and could stretch into next year.

Francesco Schettino: “And I will be there, and I will struggle with all my power and with all my energy in order that I can give my contribution to the truth. The truth will come to the surface.”

Meanwhile, the Concordia still lays where she fell. Hundreds of workers will try to right the ship for salvage in September.