Border agents cancel meeting with Trump and he’s not happy 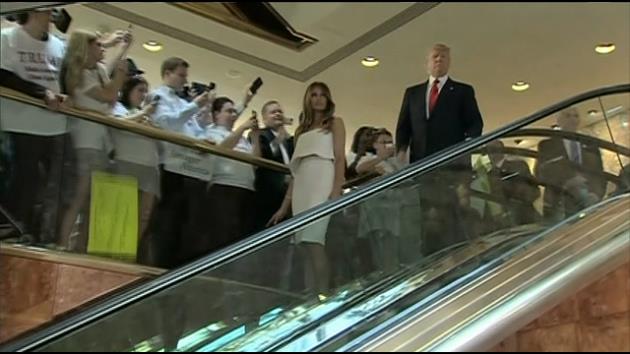 LAREDO, Texas (AP) – A local border patrol union pulled out of events involving Donald Trump on Thursday as the Republican presidential contender charged ahead with his visit at the Mexican border to highlight his hardline stance on illegal immigration.

Patrol agents had planned to accompany Trump to the border and hold a meeting with him but canceled after consultations with their national union, the National Border Patrol Council, said Hector Garza, president of Local 2455.

Trump stepped off his plane in Laredo and said the union members backed out because they were "petrified and they're afraid of saying what's happening" at the border. Dozens of people were on hand, a mix of protesters and supporters.

Some chanted "fuera," telling him to get out; a supporter waved a sign, "no era insulto," meaning his remarks about immigrants that touched off a feud with Republican rivals were not an insult.

The businessman and reality TV host planned multiple appearances in Laredo, including an afternoon news conference.

Garza said the union opted out of the Trump visit "after careful consideration of all the factors involved in this event and communicating with members of the National Border Patrol Council." He said agents had intended to give Trump and the accompanying press a "boots-on-the-ground perspective" at the border.

Trump's visit placed him a short distance from the volatile Mexican border city of Nuevo Laredo, and he said he was told he could be exposed to "great danger."

However, lawmakers and other well-known officials routinely visit the area and tour border facilities at the country's busiest inland port.

His visit drew strong reaction from some residents of Laredo, which has an overwhelmingly Hispanic population.

Pedro Omar Castillo, 72, suggested that Trump needs the growing Hispanic vote to be successful in 2016. "But he's not going to get it because of his words," Castillo said in Spanish as he walked through a downtown park. "He is a racist."

But Karina Villalba, 26, waited for Trump at the airport and held a sign saying "I heard your speech & I am NOT offended."

Trump roiled the presidential race weeks ago when he branded Mexican immigrants rapists and criminals, sparking a feud with his GOP rivals that intensified after his dismissive comments about Arizona Sen. John McCain's military service in the Vietnam War.

From party heavyweights like former Florida Gov. Jeb Bush to relative newcomers to the national scene like Wisconsin Gov. Scott Walker. Trump's rivals face his tactics of calling out his critics by name, vilifying the GOP establishment and injecting inflammatory rhetoric into the immigration debate.

In Washington on Wednesday, former Texas Gov. Rick Perry was asked about Trump's trip to Laredo. He snapped, "I hope he can find the border because I'm not sure he's ever been there before."

That was after Perry, a GOP presidential contender, denounced Trump's campaign as a "cancer on conservatism" and a "barking carnival act" in a speech that defined "Trumpism" as "a toxic mix of demagoguery, mean-spiritedness and nonsense that will lead the Republican Party to perdition if pursued."

Indeed, the insults flying between Trump and his rivals have been caustic. Sen. Lindsey Graham, R-S.C., said Thursday, "The only way we're going to be able to lose the election is continue to say things like Donald Trump is saying."

"I think he's sort of a political car wreck where people slow down and watch," Graham told MSNBC.

Others in the GOP field have been more measured, though showing signs of growing exasperation. Bush, in particular, has conspicuously tried to avoid alienating Trump's supporters – "good people" with "legitimate concerns" – even while branding Trump's rhetoric as "ugly" and "mean-spirited."

The feud is unfolding as the candidates head into a presidential election in which Hispanic voters will play a critical role, particularly in swing states like Nevada, Colorado and Florida.

"If Hispanic Americans perceive that a GOP nominee or candidate does not want them in the United States, they will not pay attention to our next sentence," reads a Republican National Committee report released after the 2012 election, citing the need to embrace Hispanic voters. "It does not matter what we say about education, jobs or the economy; if Hispanics think we do not want them here, they will close their ears to our policies."

Yet Trump, who has become a dominant force in the 2016 contest, has clearly stated, over and over again, that Mexican immigrants are unwelcome.

"The Mexican government is forcing their most unwanted people into the United States," and "criminals, drug dealers, rapists" are among them, he said in a recent statement that also declared "great respect for Mexico."

Associated Press writers Calvin Woodward and Alicia A. Caldwell contributed to this report from Washington.