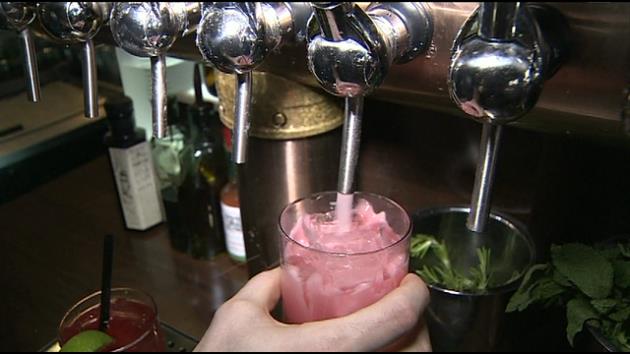 Hey, beer lovers, we’ve got a rare experience for you. Also on tap, cocktails without the waitresses. In tonight’s Style File, 7’s Belkys Nerey shows how some local spots are raising the bar.

WSVN — So a guy walks into a bar, he never has to wait on a drink and gets to serve himself. No, it’s not a punch line from a joke.

Jerry Flynn: “Consume at your own discretion and not have to wait for a bartender.”

Batch Gastropub in Brickell is now one of only a few places in the world with “tap tables.”

Luis Castillo: “You put your glass up and just pull the tap.”

The bar has seven tables with these computerized tap systems. You simply start a tab on the machine, then press a button for instant gratification of cocktails or beer.

Jerry Flynn: “We can always do two different beers at each table, one straight spirit and one craft cocktail of our choice.”

Kimberly Flores: “It’s wonderful to be able to choose what you want, whether you want a beer or a cocktail.”

You’re charged by the ounce, so you can pour as much or as little as you want.

Luis Flores: “If you just feel like having half a beer, or a full beer, you’re not forced to have the full beer.”

And when it comes to those cocktails on tap, Batch is doing some pretty cool bar science.

Jerry Flynn: “We spend possibly Wednesday and Thursday doing fresh juices, infusions. We have upwards of six to eight weeks of barrel aged cocktails. By batching these cocktails out precisely measured, everything comes out the same every single time.”

For all you true blue beer lovers out there, have I got a place for you: the new Kush in Wynwood. All kinds of special beers from the list. “The list.”

Matt Kuscher: “Basically, that’s our reserve list, and anything on that list is something you’re not going to find anywhere else in South Florida.”

Owner Matt Kuscher is working to make Kush the best craft beer bar in the country.

He and his team have put together this special list of 30 to 45 rare brews.

Matt Kuscher: “Those are beers that maybe are allocated one case to South Florida and we were lucky enough to get those cases.”

But just like their slogan, “Good beer ain’t cheap, cheap beer ain’t good.” Expect to pay the price for rare.

William Santana: “If you order something from that list, it’s not even a beverage, it’s, like, an experience.”

The reserve list at Kush is constantly changing. They also have great local beers that cost five or six bucks and we strongly suggest you try one of their amazing burgers.