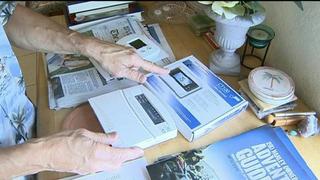 WSVN — When Bob and his wife were looking for a home in South Florida, they wanted at least two things: A place close to the water and a house that was secured.

Bob Pastorello: “So we decided it was a good idea to have an alarm system.”

That was in 2005, eight years later, they decided they wanted to upgrade their alarm system.

Bob Pastorello: “And if you noticed, we have large sliding glass windows plus the entry doors. So I wanted to have a glass break alarm.”

After looking at what the various alarm companies could offer, they decided to go with a different company.

Bob Pastorello: “And the new company we were looking at had a wireless glass break alarm and a camera, and as well as remote entry, which is kind of nice too.”

They signed up with the new company. Then called the old alarm company to say, sorry but we are canceling.

Bob Pastorello: “He proceeded to tell me that we have a five-year contract.”

Bob thought no problem, he had been with them for right years so the contract had expired but …

Bob Pastorello: “He said, ‘No. No there’s a clause that says it renews for five years, every 5 years.'”

Bob says the company representative said, if you wanted to cancel after five years, you had to notify us. Bob didn’t know that and to cancel now.

Bob Pastorello: “And he says, well you’re gonna owe us, and he rattled off and did some calculating, he said $842 to leave us.”

In other words, Bob had to pay off the years left on the contract. Bob is a smart fellow so he quickly responded.

Bob Pastorello: “I said but I would like to see my name on a contract that states that. And he says, ‘Oh we’ll, get it to you right away.'”

The company hasn’t sent Bob a copy of the contract that says it renews every five years if you don’t cancel that he allegedly signed, and bob doesn’t think they will find it.

Bob Pastorello: “You know, I doubt it because I think I would’ve kept a copy of it.”

And his feeling about being forced to pay for an alarm that automatically renews for five years if you don’t cancel the contract.

Bob Pastorello: “Well, I thought that was absurd.”

Well Howard, Bob thinks its absurd but do you think its legal?

Howard Finkelstein: “When Bob started using the alarm company it was legal to automatically renew a contract, but because so many businesses took advantage of customers, in 2010 the legislature changed the law. It now requires the business to notify the customer that the contract is up for renewal and they have the right to cancel it.”

They said since they had acquired Bob’s account from another company his email address may have gotten lost in the transaction, and that may explain why he didn’t get the cancellation notice. They then apologized and allowed him to cancel the contract and not have to pay the $800.

Howard Finkelstein: “When you have a service contract you need to keep it in a safe place. If you cant find the contract, ask the company to send you a copy. And by the way, if they don’t notify you that the contract is up for renewal, you can get out of it.”

Bob got out of the old contract without paying and now wonders if he was paying for nothing for awhile.

Bob Pastorello: “And she said you know its funny when we disconnected the old system, no body ever called us. The alarm must not have activated.”

Patrick Fraser: “If you are going to sign up with an alarm company, they have to notify you by mail or email when its up for renewal. But tell them you dont want that clause in the contract. Tell them if they want to renew it, they have to call and talk to you. And if they dont want to do that, there are plenty more companies under the label … alarm.”

Alarming situation left your ears ringing? Need to alert someone? That’s us. We may not be wired perfectly, but we do have a connection. Howard has a lawbook.