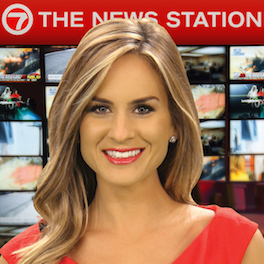 Lorena Estrada joined WSVN in January 2014. She is honored to serve as weekend morning anchor and general assignment reporter in her hometown.

The Miami-native began her career at WVLT (CBS) in Knoxville, TN as weekend anchor and reporter. A month after graduating from Florida International University with a double major in Journalism and Sociology, Lorena packed her bags and moved to East Tennessee. She called Rocky Top home for nearly four years.

At WVLT, Lorena covered a wide-range of stories from the 2011 tornadoes that devastated the community, the 2012 Presidential Campaign to undocumented immigrants fighting deportation. Lorena also became involved with East Tennessee’s Centro Hispano, a local non-profit organization serving the hispanic community.

Lorena continues to cover it all at WSVN.

Born to a Greek mother and Nicaraguan father, Lorena speaks Spanish and Greek. She developed a passion for news and travel at a young age while traveling the world with her family. She grew up visiting her parents’ native countries as well as Venezuela where her mother was raised.

When Lorena isn’t working or catching up on sleep, she’s spending time with her husband Jason, their dog Zeeke and other relatives. She also enjoys emceeing events for local charities and organizations she’s involved with including Joshua’s Heart Foundation and Florida Hemophilia Association.