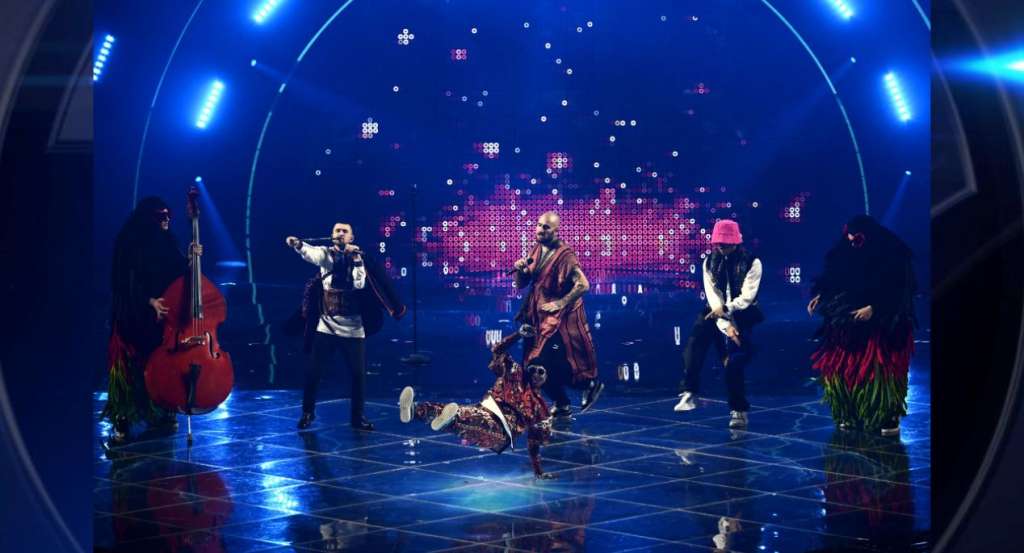 The band’s song “Stefania,” written about the frontman’s mother, beat competition from main rivals the United Kingdom and Spain at the competition in the Italian city of Turin.

The event marked the first major cultural event in which Ukrainians have taken part since Russia invaded in February, and many in the audience waved Ukraine’s blue and yellow national flag during the evening.

“Our courage impresses the world, our music conquers Europe!,” he said in the post.

Alluding to the rule that a winner of the previous year’s competition gets to host the contest, he said: “Next year Ukraine will host Eurovision! For the third time in its history. And, I believe, not the last. We will do our best to one day host the participants and guests of Eurovision in Ukrainian Mariupol. Free, peaceful, rebuilt!”

Tamile Tasheva, the permanent representative of the President of Ukraine to Crimea, suggested Yalta, a resort city on the south coast of Crimea, the Ukrainian peninsula that was annexed by Russia in 2014, as a possible venue.

The country’s entry “Stefania,” sung in Ukrainian, is a tribute to frontman Oleg Psyuk’s mother, who still lives in the western city of Kalush, from which the band takes its name. “On some days there are rockets flying over people’s houses and it is like a lottery — no one knows where it will hit,” Psyuk told CNN this week ahead of his performance.

“As we speak, our country and our culture is under threat. But we want to show that we are alive, Ukrainian culture is alive; it is unique, diverse, and beautiful.”

The event in Turin saw several of the elaborate and camp performances that have become Eurovision’s hallmark. A Norwegian entry by electro duo Subwoolfer warned of hungry animals eating the singers’ grandparents, while Serbia’s Konstrakta meditated on the secret to Meghan, Duchess of Sussex’s hair.

But fans rallied behind Ukraine’s entry, and the band received one of the loudest cheers of the night when they took to the stage.

In a bar in central Kyiv, not far from the city’s famous golden roofed Saint Sophia Cathedral, a small Eurovision viewing party was taking place on Saturday night. Max Tolmachov, the owner of the Buena Vista bar, said people who came to the bar were keen to show their support for Ukraine — even if Eurovision wasn’t exactly their thing.

“They want to show their patriotic spirit. This war has been really hard on people and this is an opportunity to put the dark thoughts aside for a bit,” he told CNN.

His bar played a role in Ukraine’s resistance too. During the height of the battle for Kyiv, a military checkpoint was positioned right in front of it. “The soldiers would come in to get some rest, we were cooking food for them — borscht, soups, meat, potatoes, there wasn’t much selection at the time,” he said.

While many were excited to watch Ukraine’s victory in the contest, no big parties took place in the capital on Saturday. A strict curfew that starts at 10 p.m. local time, the same time as the Eurovision broadcast, meant people wouldn’t be able to get home once the parties wrapped up.

Tolmachov had a plan though — his staff agreed to stay through the night so patrons could party until the small hours.

This year’s Eurovision took place in Italy following a victory by punk rock band Maneskin last year. It was the first Eurovision final to take place without major Covid restrictions since the pandemic began; the 2020 edition was cancelled, and last year’s featured crowd restrictions and some remote performances.

Kalush Orchestra initially finished second in Ukraine’s national selection competition, but was elevated after it emerged the winner had previously traveled to Russian-annexed Crimea. The group was unveiled as the country’s entry on February 22, two days before Russian troops invaded Ukraine.