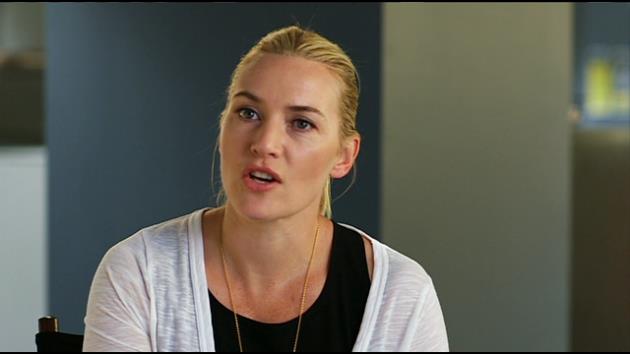 "Triple 9" is a cop code for officer down. It’s also a new movie with a huge cast: Casey Affleck, Chiwetel Ejiofor, Anthony Mackie and Aaron Paul, among others. But the real surprise is Kate Winslet. She’s a psychopathic crime boss and scary good at it, if you ask her co-stars.

Woody Harrelson (as Sgt. Detective Jeffrey Allen): "Out here, there is no good, and there is no bad."

"Triple 9" is a cops and robbers movie — with a twist.

Woody Harrelson (as Sgt. Detective Jeffrey Allen): "To survive out here, you gotta out-monster the monster."

Corrupt cops are the robbers!

Casey Affleck: "It’s a big ensemble movie with a bunch of people who are kind of all complicated and, ah, messed up, and in some cases corrupt."

He’s a straight arrow with no idea his partner, Anthony Mackie, is one of the bank robbers. Chiwetel Ejiofor, Aaron Paul and Norman Reedus are all corrupt cop robbers, too.

Chiwetel Ejiofor: "Kate was pretty terrifying, actually, in this role. It’s just exciting. You know, all of these guys are controlled by this woman that Kate plays so well."

Chiwetel Ejiofor (as Michael Atwood): "There’s another job. She said she’d kill every last one of us if we don’t get this thing."

Kate Winslet: "Playing a a truly brutal, horrible, horrific human being isn’t something that I have done before. I think my first reaction when I read it was, ‘I can’t play that role. I can’t, I won’t be able to do this.’ And so, of course, then I sort of thought, ‘Oh, damn, OK. Well, that’s really the ultimate challenge, and that’s really why I should be considering doing this."