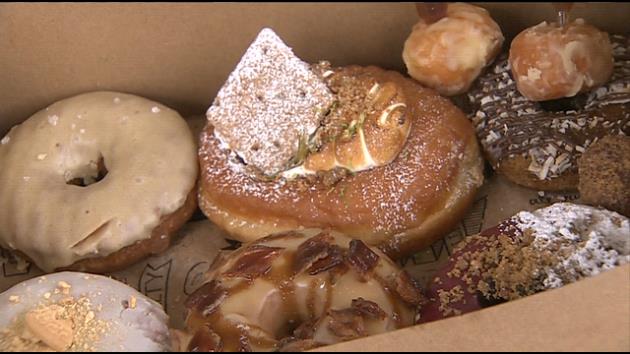 You know our theory on eating, and if you don’t, it’s "eat dessert first." There’s a pop-up in Wynwood where the early bird gets the donut. This is a whole new donut game!

Homer Simpson would be happy. SoFlo is becoming a donut mecca, thanks in part to The Salty Donut, a pop-up shop in Wynwood.

When you think artisan, you don’t usually think of donuts … until now.

Everything is fresh — no preservatives here.

Andres Rodriguez: "We don’t have a conveyor belt of donuts that’s flipping donuts onto the conveyor belt thousands at a time. Someone, an artisan, a chef, touches ever single donut that goes out the door."

Both the yeast and cake donuts are made in small batches. And they taste like they were just made — because they were!

Andres Rodriguez: "If we sat there and make 4,000 donuts and sold them throughout the day until we ran out, by the end of the day, they wouldn’t be fresh and wouldn’t be good to our standards."

Hannah Roza: "It felt like a donut that was just freshly baked, and it was really good. You can taste the freshness in the donuts."

Until they move into their permanent location, Salty Donut is calling this pop-up home.

Andres Rodriguez: "We make our donuts in a commissary kitchen and bring them three times a day."

The flavors rotate, and there are about seven a day.

From blueberry to maple bacon with a beer reduction, or guava and cheese or spiked donut holes, there’s something for everyone. Just get there in time.

The Salty Donut also stepped up the coffee game.

Andres Rodriguez: "We have interesting coffees and coffee cocktails."

The cold brew is on tap, and the cereal milk latte mixes espresso with Cinnamon Toast Crunch infused milk.

Andres Rodriguez: "We have espresso and tonic, but we do it with tonic water over ice, so it comes out like an iced lemon lime soda that ends with an espresso thing in the back."