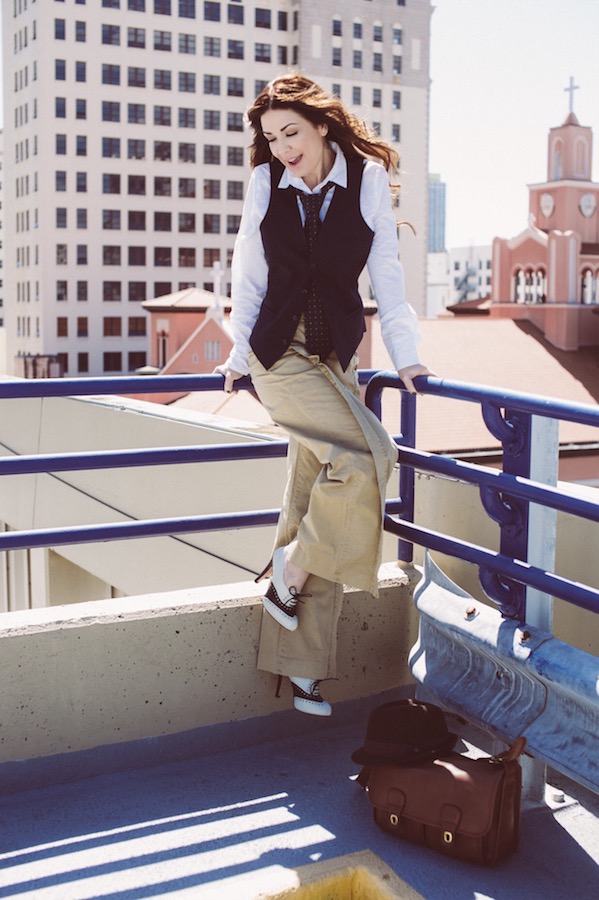 What:
Scavenger-hunting wardrobe pieces to express my “Annie Hall” fashion obsession; because there’s nothing like a woman in a shirt and tie (at least, that’s what I’ve been told.)

Why:
I can’t remember the exact moment I fell in love with Woody Allen’s 1977 movie, “Annie Hall” — but I can assure you, it’s pretty much been a lifelong obsession. Sealing the deal…

My first face-to-face interview with actress, Diane Keaton, who easily brought the neurotic, fun-loving “Annie” to life. Even though the role was written specifically for her, the character has grown over the years into more than just an extension of Diane’s personality and style: its popularity and staying power has turned it into a pop culture phenomenon.

That fact isn’t lost on Diane, as she easily chatted with me about it during our 2003 interview at the Waldorf Astoria in New York City. At the time, I was covering the movie, “Something’s Gotta Give,” which she also starred in as yet another neurotic, self-deprecating fashionable character, looking for love (albeit this time, later in life.)

I asked her if most of her roles serendipitously lead back to the one that changed her life and career. We both had a good chuckle and then talked feverishly about the all-encompassing beauty of the famous character…

Her fragile sensibility, strong sense of individuality and the fact that “Annie” made it okay to be beautifully different, even if that meant quirky, neurotic and fashionably eccentric.

The late Ruth Morley, who designed the costumes for “Annie Hall,” credited Keaton for a lot of the film’s (now famous) wardrobe choices. In turn, Diane has said in past interviews that she found her fashion inspiration for the film from women in lower Manhattan. More specifically, the ones who walked the city streets in over-sized jackets, tailored shirts, vests and floppy hats.

Ralph Lauren, who provided some of the key wardrobe pieces for the movie (like the famed white tailored “man” shirts,) told “Vogue” Magazine that while Diane shared his same fashion “sensibility,” her style in the film was hers alone and a remarkable one at that. Hence all the “Absolutely Annie” interpretations over the last 40 years, including my own.

Taking a cue from the fashions in the film has always made a lot of sense to me, especially early on in my journalism career. It helped relax my uptight television wardrobe, adding personality, style and sensibility. As I’ve grown older, though, I’ve realized “Annie” and her infamous style are about so much more than just tomboy silhouettes with feminine nuances.

The character is about self-acceptance, no matter how hard that may be. “Different” is interesting and should be celebrated in ourselves and others. Over the years, being “Absolutely Annie” has helped me in accepting my own idiosyncrasies and truly, that’s more stylish than I ever dreamed I could be — that’s why it’s one of my favorite things.

Where:
See more at ShireenSandoval.com

When:
Perfect to watch on a rainy day, if you’re recently single or just love fashion!

“This is what life is. People bring you to places you never expected you would go.” —Diane Keaton