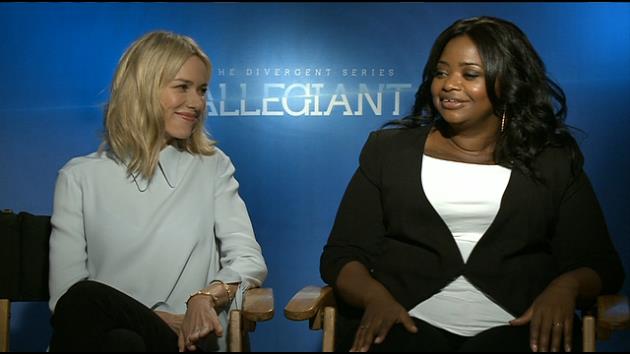 The weekend was so disappointing. There are reports out of Hollywood that the budget for the next "Divergent" movie, "Ascendant," is getting slashed! But "Allegiant" is still offering lots of action. Three bosses are going up against each other and gearing up for an epic fight, and the film’s stars dished the deets to Deco.

The next chapter in the "Divergent" series is all about power. In "Allegiant," three leaders compete for domination.

Octavia Spencer: "Well, Johanna is a more reluctant person to ascend to power, but she feels the need to restore order by taking them back to the faction system."

In the movie, the people of Chicago must choose between going with Johanna or following another leader, Evelyn, played by Naomi Watts.

Naomi Watts: "I think Evelyn, her yearning for power is a little more self-serving. She is coming from a place of having nothing and now wanting everything, with a little bit of revenge in there as well."

Both bosses may need to unite if they want to fight a higher power.

Jeff Daniels: "David, he’s kinda the one who orchestrated this whole huge experiment of Chicago and the wall and the factions."

Jeff Daniels plays the leader of the Bureau of Genetic Welfare, who is passionate about his cause.

Jeff Daniels: "Going in, it’s trying to do his life’s work. It’s something that is for the better, to make humanity better."

Johanna’s style is soft and motherly.

Octavia Spencer: "All of my flowing materials, I made them do that ’cause I wanted them to hide all of my secrets."

Jeff Daniels: "We seem to be stuck in one black suit, and I have a feeling that he’s got a closet and it’s like 30 of the same suit."

As for Tris, she looks way different in this one.

Shailene Woodley: "It was odd to be in a dress and in heels, and then in that very structured tight white outfit, and to feel grounded in Tris’ truth."

Her truth? To save the people of Chicago from almost certain death.