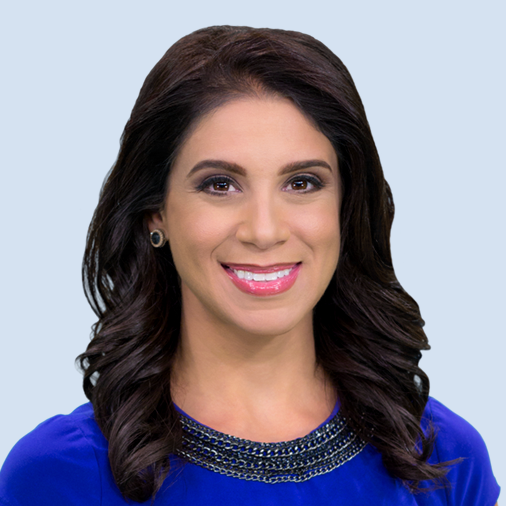 Erika Delgado is the weekend morning meteorologist at WSVN.

She began her career in Boston forecasting for various locations across the country as an on-air bilingual meteorologist with the Weather Company. Covering cities from coast to coast allowed her to gain a comprehensive understanding of the nation’s weather – droughts in the west, blizzards in the northeast, tornado outbreaks in the Midwest and hurricanes on the East Coast. Erika had her first stint in local news at WCSH in Portland, Maine as a freelance meteorologist.

As a South Florida native, Erika’s passion for the weather can be traced back to 1992 when Hurricane Andrew came barreling through South Florida. While her father was busy boarding up their Hialeah home, she pleaded with him to leave a small opening in one window so she could experience the full power of the storm. Upon witnessing the devastating aftermath, Erika decided to make it her career mission to forewarn people of impending natural disasters.

Erika holds a Bachelor’s degree in Journalism from Florida International University and then continued on to Mississippi State University where she earned a Bachelor’s degree in Broadcast Meteorology and a Master’s degree in Geosciences. She is honored to be able to work in her hometown as part of the 7 News Weather Team & welcomes any opportunities to work with local charities and organizations in order to give back to the same community that has given her so much.

In her free time, Erika is a spinning instructor, maintains an active, healthy lifestyle, spends as much time out on the water as she can & enjoys spending as much time as possible with her family.