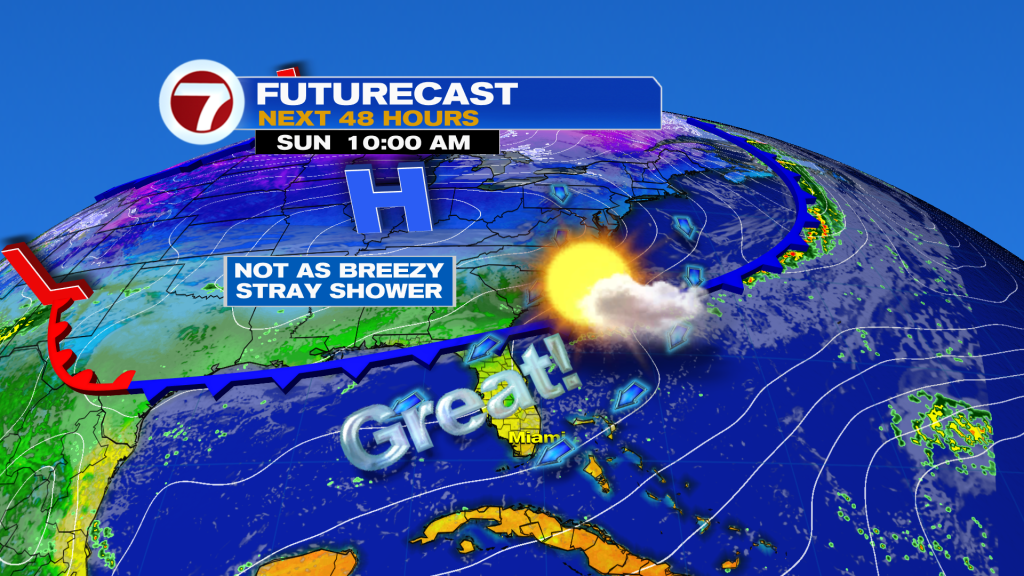 A little chill is in the air across parts of South Florida this Sunday morning with numerous locations waking up to near-normal temperatures into the mid to upper 60s, especially across Miami-Dade County, courtesy of a northerly wind flow, ushering in cooler air south and down the Florida Peninsula. This will be a feature into Monday and Tuesday mornings as well, and while the Broward coast has avoided the 60s this morning due to an east breeze, there will be a better chance for sub-70F temperatures these next couple of mornings.

Other than the “cooler” start this Sunday morning, Sunday will be another beautiful day. It will be very similar to Saturday minus the wind. Instead, winds will be lighter out of the northeast from 10-15 mph paired with mostly sunny skies, low humidity and a very spotty shower chance near the coast. High temperatures today will remain slightly above average into the low 80s.

The new week will remain very nice and pleasant and similar to this weekend’s weather. High temperatures will hover into the low 80s through at least Wednesday paired with a good deal of sunshine and low humidity. Most — if not all — of South Florida will be dry, but I did include a 20% rain chance on Monday and Wednesday due to a few showers expected offshore, some of which could briefly make it onshore during the day. But other than that, it will be nice and quiet! By late-week, temperatures could creep up a degree or two but remaining nice and mostly dry.