Steamy weather has its grip over the region.   Yes, we come to expect this during the summer months.   What makes it more notable (for now) is that we no longer have a beneficial, strong breeze.  Wind speeds have come down as high pressure sits over the eastern Gulf of Mexico.   As the sun beats down, temperatures easily elevate to 90 degrees or above.   The overall humidity has also been bumping up over recent days.   That’s due to a minor “air switch”.   When we started the week, air was arriving from the northeast, instead of the southeast (as it is now).   As we start thinking about the weekend, we face a classic summer set up, for south Florida.   Days will start with patchy clouds arriving from the ocean and some may contain brief showers.   Then, the general sea breeze will slowly march inland.   With the heating of the day (and small circulations) there will be some scattered storms drifting around.   Active thunderstorms will tend to favor areas that are well inland, then they will slowly trek westward in this type of pattern.   If you’re heading to the Atlantic beaches in the days ahead, be prepared for plenty of strong sunshine.   We’re just days past the summer solstice and the sun angle is incredibly strong… so you can get burned very quickly! 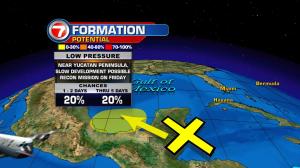 In the tropics, we’re watching a broad area of low pressure near the Yucatan.  It’s expected to emerge into the southernmost Gulf of Mexico where it will have limited time to develop.   The National Hurricane Center is giving it a “low” chance to organize as it moves steadily to the west or west northwest.